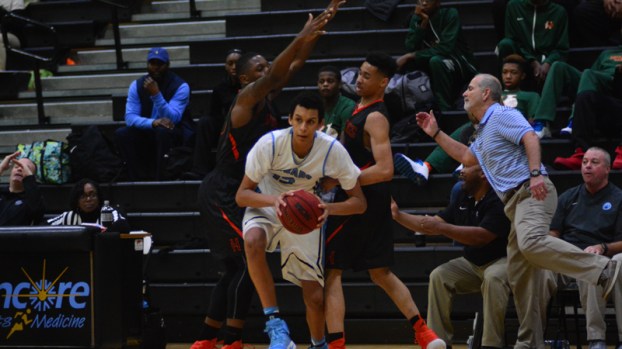 HOOVER – Spain Park’s boys basketball team may sit at 8-11 overall on the season, but the Jaguars’ 2-0 area record after a 52-48 win over Huffman on Friday, Jan. 13 is the most important record.

SPHS had to overcome a fast start by visiting Huffman and then hold on late for the win.

Huffman’s Travarus Carroll was fouled while scoring on a fastbreak and then made the free throw with 5:30 on the clock to cap a 7-2 Vikings run to start the game.

Spain Park’s Ron Fortson scored off the glass to make it 8-all with 2:45 to go in the first period, after Gordie Stewart kept the possession alive with an offensive rebound.

The visitors led 14-12 at the end of the first period, but Parker Boswell found an open Lynn Kidd to the tie the score.

Kidd blocked a Huffman shot on the other end of the floor to set up Brooklyn Polk for an and-1 to make the score 17-14 Spain Park.

Boswell scored later in the period on a nifty move, and a free throw by Jamal Johnson made the score 24-18 in favor of the Jaguars.

Fortson pulled down an offensive rebound and put it in for a 27-20 lead, and Johnson layed it in as time expired in the first half for a 29-22 edge for Spain Park.

Huffman whittled away at the lead in the third period, and cut it to as little as one point, but Johnson drove and kicked out to Xavier Blanchard for a three-pointer with time winding down in the period to make the score 40-36.

Huffman’s Decorian Avery scored on a strong inside move to make the score 46-all with 2:17 left to play.

With 1:04 on the clock, the Vikings tried to double team Johnson in the backcourt, but the star senior split the trap and drove all the way for a slam dunk and a 50-46 Spain Park lead.

Down two and with Huffman in possession of the ball, Spain Park was called for a questionable foul, but the Vikings missed the front end of a 1-and-1.

Boswell pulled down the rebound on the missed free throw. He was fouled on the other end and sank both free throws to seal the win.

Johnson led all scorers with 19 points.

Boswell and Blanchard each had eight points.