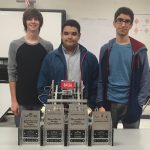 “VEX Robotics Competition Starstruck is played on a 12×12 square field,” OMHS robotics instructor Paula Hughes said. “Two alliances of one ‘red’ and one ‘blue,’ composed of two teams each, compete in matches consisting of a 15-second autonomous period followed by 1 minute and 45 seconds of driver-controlled play. The object of the game is to attain a higher score than the opposing alliance by scoring your stars and cubes in your zones and by hanging robots on your hanging bar.”

Hamid Choucha, Adam Pendry and Omar Zuaiter attended the competition in November 2016, which was held at the Brewbaker Technical Magnet School in Montgomery.

This was the second competition of the year the group attended, according to Hughes.

“It was a lot of fun,” said Choucha, a 10th grader at OMHS. “We spent a lot of time figuring out how to throw these stars and cubes over a one foot wall. We started planning over the summer and we attended our first competition in September, we tried to fix all of our mistakes, and then we worked on the design process some more before competing at the VEX Competition. We are now looking forward to attending our next competition on Jan. 21 in Oxford.”

Hughes said robotics is a hands-on way for students to learn about the engineering design process, programming, teamwork, budgeting, perseverance and sportsmanship, while also having fun.

“These guys are self-motivated, committed and very focused,” Hughes said. “They are determined to win Nationals this year, and I have no doubt they will. These students do most of their work after school hours. They spend countless hours designing, practicing, improving and repeating the process at night and on the weekends.”

While Choucha said he has not officially decided what sort of career he might pursue in college, his work with robotics in high school has influenced the career fields he is considering.

“I have been looking into colleges that offer a program that focuses on robotics engineering,” Choucha said. “Robotics is something that is very enjoyable for me and has greatly influenced the way I look at my future.”

HOOVER – Hoover City Schools outpaced the state at large in every category graded in the most recent Alabama Department... read more