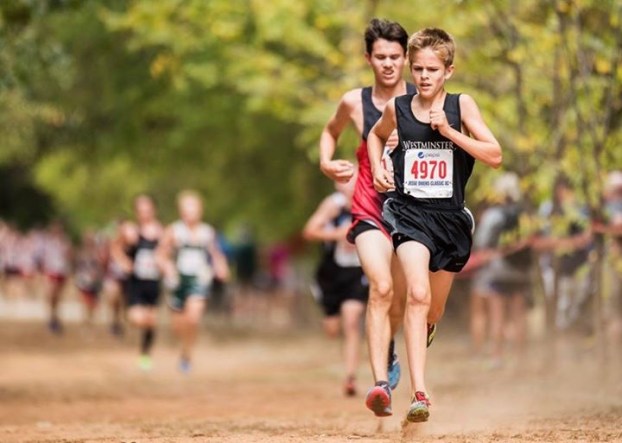 The Westminster School at Oak Mountain’s Hunter Wright is just an eighth grader, but has the chance to develop into one of the state’s elite distance runners. (Contributed)

NORTH SHELBY – Hunter Wright got into running the same way most boys get into any sport.

“My parents thought I’d like it, and I didn’t have anything against it,” Wright said matter-of-factly on Jan. 11. “In fifth grade, they made a lower school cross-country team, so I started running then.”

What started as an experiment quickly evolved into a lifestyle for the youngster, who had a natural ability rarely found in runners that young. At the age of 13, he ran the last 18 miles of a 50K his father was running without stopping for rest. Now, at the tender age of 14, the 5-foot-2-inch eighth grader will be asked to carry a large load on his slender shoulders for a capable Westminster track team, and will have more of a de facto leadership role than perhaps any middle schooler across the state this spring on the track.

The Westminster School at Oak Mountain, where Wright has been a student since he was in kindergarten, has enjoyed much success on the track in the past decade at the 1A-3A level. The boys have won eight straight outdoor track sectionals and have been the state’s runner up in 2012 and 2015, as well as the indoor track state runner up in 2013. The girls won back-to-back outdoor track state championships in 2013 and 2014, and have placed as the runner up four times since 2009, including 2016.

Dale Carrell has been the track and field coach at Westminster for more than 10 years now and has overseen the emergence of the Knights’ track program at the state level. In his time, he has coached a number of talented runners, but Wright is unique in one obvious way.

“I’ve seen a few like him,” Carrell said. “Katie Brooks, who runs for Auburn, she had that talent. She won the 400 at the state meet in seventh grade and she won 18 medals. Maddie Hoaglund, a senior, has had that kind of success. Morgan Reynolds runs for Birmingham Southern. So we’ve seen potential like this. But this is the first boy that’s this young (with that kind of potential).”

He’s well-spoken and charismatic with a tuft of blonde hair that sits on top of his head. There is a hint of a cowlick, but it’s possible the miles that have already rolled by underneath his feet have altered his scalp, making it seem as if he’s always running into a slight breeze. He enjoys the humanities, and he’s optimistic he’s not done growing just yet. But above all else, Hunter Wright just loves to run.

“I just like running,” Wright said. “I like trail running, it’s an easier pace but you can still get some intense runs in, and the scenery is nice. I think running marathons would be really fun; I just really like the long-distance stuff.”

Since 2000, there has only been one eighth grader in Alabama to register a faster indoor 3,200-meter time than Wright, and that was Griff Graves all the way back in 2004, who ran a 10:10.47. Graves then moved to Virginia, won a pair of individual cross-country state titles and had an impressive career running for Syracuse University. In the 1,600-meter, there have been just a handful of Alabama runners ever to go lower than Wright’s 4:54.66 in the eighth grade. One of those was Will Stone, a current Homewood sophomore who won the 6A cross-country individual title this past fall with a time of 16:01.40.

All of that is simply to say Wright has a chance to become one of the state’s top runners before he is legally allowed to drive a car. When combining the amount of raw talent Wright has with his love of the sport and his drive to succeed, look for the youngster with the quick feet and blonde hair to be at the front of many a pack this spring.

By ALEC ETHEREDGE | Sports Editor Just like the guys rankings, we’ve been on a month-long hiatus from receiving a... read more