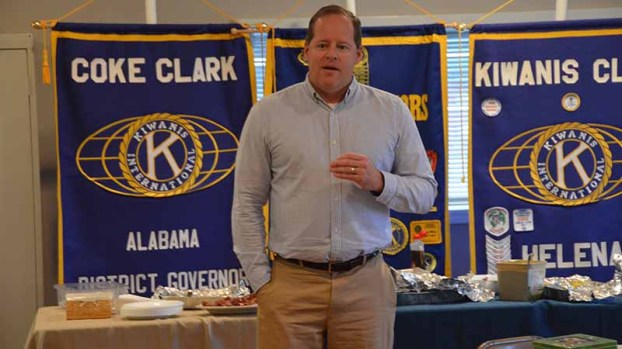 HELENA–State Sen. Cam Ward, R-Alabaster, took time out of his morning on Tuesday, Jan. 17, to address the Helena Kiwanis Club for nearly half an hour at the clubs’ weekly meeting to discuss a variety of political topics.

Ward pointed out that a number of years ago, the Helena Kiwanis Club was the first Kiwanis Club that Ward ever addressed and to this day, he comes back to speak to the club annually.

Ward touched on the recent victory of Donald Trump in the election to become the 45th President of the United States.

“Republicans should be happy because they pulled an upset win in this last election,” Ward said. “I was not a Trump guy, I was a Rubio person in the primary but Republicans really pulled off one of the biggest upsets ever. Now the problem is, Republicans control it all so there’s no excuses. I think looking at Washington there’s a couple things I see coming out of Washington that’s different. There’s a lot of unknown. A lot of people don’t know the philosophy in which President Trump is going to go because he’s never cast a vote and he’s never had to make a public position on policies.”

Ward said that he didn’t think the uncertainty was a bad thing, citing Trump has a solid agenda and ideas and millions of Americans chose to vote for Trump because they wanted a change.

Ward will be attending Trump’s inauguration the week of Jan. 16 and said it is one of the most interesting things a person can attend and witness.

“I am going to the inauguration this week,” Ward said. “My wife has never been and I’m taking her. If you’ve never done it, that is one of the most interesting and fun historical things in the world. I might be one of the only people around here to go to both Democrat and Republican presidential inaugurations. I love the history of it and I love the ceremony.”

Aside from discussing Trump, Ward answered questions from Kiwanis members that included a question about the recent push for the lottery in the last legislative session.

Ward is currently preparing for the Alabama Legislature’s next regular session on Feb. 7 in Montgomery.