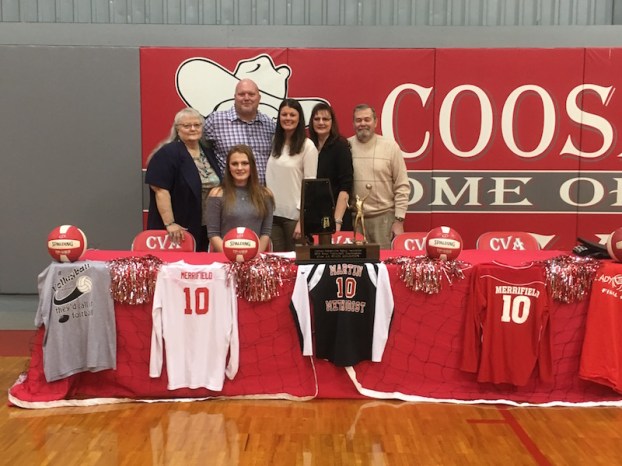 Coosa Valley Academy’s Kalei Merrifield is surrounded by family as she signs her letter of intent to play her college volleyball at Martin Methodist College. (Reporter Photo / Baker Ellis)

HARPERSVILLE – In the last two years, Kalei Merrifield has helped lead the Coosa Valley volleyball Rebels to new heights. In Merrifield’s junior and senior seasons, Coosa Valley reached a cumulative 49-8 mark, which included back-to-back appearances in the AISA AA Final Four, as well as the program’s first state title and perfect season this past fall. Merrifield has been a mainstay in the middle of the floor for the Lady Rebels since she arrived at Coosa Valley as a junior, and on Jan. 16 signed a letter of intent to play her college volleyball at Martin Methodist College in Pulaski, Tenn.

“If any of you guys have ever been to a volleyball match that we’ve held, it would take you about 30 seconds to realize who was our most powerful hitter,” Coosa Valley head volleyball coach Jamie Gill said during Merrifield’s signing ceremony on Jan. 16. “Kalei is that person. She commands the floor; you can’t watch a game and not notice the girl in the middle. She was a great addition to our program when she came a few years ago.”

Merrifield was named a First Team All-County selection as a middle hitter at the conclusion of the 2016 season, and she led the county with 497 kills to go along with 108 digs, 61 blocks, 58 aces and 23 assists. In the state finals this season, Merrifield was instrumental in Coosa Valley’s win over five-time defending state champion Macon-East, as the Lady Rebels dismantled the defending state champ in four sets, 25-18, 16-25, 25-21, 25-17, and Merrifield was named the tournament MVP in the process.

When making her college decision, Merrifield said she felt an early attachment to Martin Methodist.

“I had a recruiting camp up there over the summer and fell in love with the college,” Merrifield said. “I knew I didn’t want to go to a big school, the small school is what I liked. I had a few other offers, but I felt like Martin was home to me.”

While she felt an early connection to the school, she said she waited until after the Lady Rebel’s undefeated season was complete before making a final decision.

“By the end of October, right when we won state, I knew I wanted to go there,” she said.

Martin Methodist is an NAIA Division I school, and is one of the newest members of the Southern States Athletic Conference, as the school joined in 2013. The RedHawks went 14-19 in 2016, matching their highest win total since the 2010 season. Merrifield will likely stay in her middle hitter role at the collegiate level, and has the opportunity to contribute immediately in 2017.