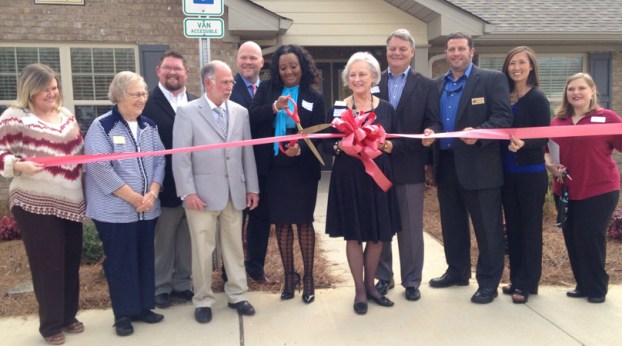 Located on Alabama 25, the apartment complex has 30 one-story units with new appliances. Residents who live in the facility also have access to an exercise room and a computer room.

“It’s going to impact Columbiana in a lot of ways. It’s definitely a win-win situation for the city, as well as for the people who are living here,” said city councilwoman and mayor pro tempore Ouida Mayfield.

“It seems to be a very positive thing for those who are 55 and older,” Sullivan said.

Construction for the facility was complete and some residents had moved in by the end of November 2016.

Several residents said they are appreciative of their new living situation.

“It feels like, for the first time, I am at home. I love it here,” said resident Beverly Williams. “Whoever has the opportunity to be a resident here is truly blessed.”

Williams said living at the facility has been a positive and peaceful experience.

“It’s like living in a house, because there’s so much space. All of the neighbors I’ve met are very friendly. To me, it’s been the most enlightening experience of my life,” Williams said.

“Not every community has this. This is the second installation from this company, and they’re asking for more,” McClendon said. “This makes Columbiana a more desirable place to live. This is a beautiful place, and it’s a great place to live for some really good people.”

Both Chester and Scott Parker and the Gateway Companies were the developers. Previously, they developed the Shoals Mill Apartments at 55 Coby Lane.

“How exciting this is for the residents to live in the city of Columbiana,” McClendon said. “This housing is beautiful, and it really is an asset.”

By GRAHAM BROOKS / Staff Writer HELENA–The Kiwanis Club of Helena and Helena Elementary School will be teaming up once... read more