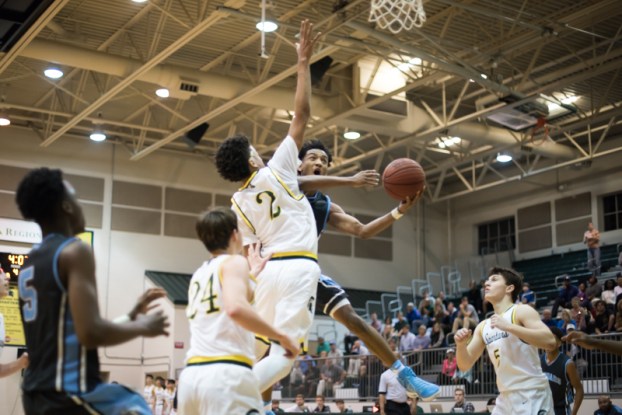 Spain Park's Jamal Johnson drives and makes a contested layup for two of his 31 points in the game as he lead the Jags to an upset of the state's No. 1 team. (Reporter Photo/Keith McCoy)

MOUNTAIN BROOK – Spain Park traveled to Mountain Brook to take on the No. 1 basketball team in the state on Tuesday, Jan. 17 in a matchup of two of the best basketball programs over the past seven years.

Spain Park came into the game with an 8-11 overall record to the Spartans’ 20-2 overall record. Another obstacle for the Jags to overcome was the fact that Mountain Brook had won 38 consecutive games in Spartan Arena. It was clear it would take a monumental effort from Spain Park especially without last year’s go-to man Austin Wiley on the team, who helped lead them to two home wins over the Spartans, but all that mattered to the Jags was that they had the same 2-0 area record as Mountain Brook.

“We’ve gotten so tired of losing,” Spain Park head coach Donnie Quinn said. “It’s a new year and a new start, we talked about what we were going to do with our start. The whole chemistry is different right now and it all changed at the start of the new year.

Quinn’s team showed they had turned a page and could still be one of the state’s best teams as they pulled one of the upsets of the year by knocking off the No. 1 Spartans 66-62 on the road.

The game came all the way down to the final seconds as the two teams battled hard for all 32 minutes of action in one of the more intense basketball games you will ever see. After Memphis signee and Spain Park leader Jamal Johnson and top 2019 recruit Trendon Watford for Mountain Brook battled back-and-forth for several minutes in what felt like a heavyweight bout, the Jags held a 57-52 lead with just a couple of minutes to play in the game.

Mountain Brook (20-3, 2-1)battled back to tie the game at 57 all after going on a 5-0 run. They fought back-and-forth to a 60-60 tie before several players stepped up for the Jags. First it was Parker Boswell who drained two clutch free throws to put Spain Park up 62-60 with 52.2 seconds to play.

The Jags (9-11, 3-0) came back and got a big defensive stop on the Spartans’ ensuing possession and Johnson was fouled. After going perfect in the game from the free throw line, Johnson struggled in the final minute only making two of his four free throws. After making one of two, Spain Park had a 63-60 lead.

“I can’t believe (Johnson) missed those free throws, he’s used to making those so I think he was shocked too,” Quinn said with a chuckle.

Watford drove to the basket as soon as he got the ball on Mountain Brook’s next possession and was fouled. He hit both free throws to bring the Spartans to within one.

Johnson got fouled on the inbounds and headed back to the line where he again made one of two to put his team up by two, but with his other made free throws it would’ve been a five-point game.

Only down two, Mountain Brook had to feel confident they had a good chance of tying or taking the lead with the way the team had answered every Spain park shot in the second half. The Jags stepped up the defensive pressure, however, and got a crucial stop with 7 seconds left to play.

Brooklyn Polk was fouled and sent to the line for the Jags. The senior stepped up and drained both free throws in the clutch to put Spain Park up 66-62 and seal the game as that was the final score.

“Some of the unsung kids, a couple of those last free throws by Brooklyn Polk were huge as well as hitting those free throws,” Quinn said of other guys stepping up. “I’m just so happy that others stepped up tonight, I’m glad it wasn’t just (Johnson).”

Mountain Brook started the game strong on an 8-2 run, but Johnson quickly turned up the heat and had 13 of Spain Park’s 14 points in the first quarter to put the Jags up after one. They pretty much played from ahead all night as the Spartans struggled shooting the ball from deep.

It also helped that Watford only had three first-quarter points. It was fun to watch him turn it on after that, however, as he had 31 points over the final three quarters for a game-high 34 points. Johnson had 31 for the Jags as both he and Watford created a cinematic environment that was more than entertaining. Polk also scored in double figures for Spain Park with 14. Sean Elmore and Ben McCool had 11 and 10, respectively, for Mountain Brook to give them three double-digit scorers.

Spain Park ended that 38-game home winning streak and more importantly moved to 3-0 in what some consider the toughest area of basketball in the state.

“Such a competitive atmosphere,” Quinn said. “To come over here and get this win, I don’t know the last time that has happened to tell you the truth. It’s been a while since they’ve lost here, just so impressive.”