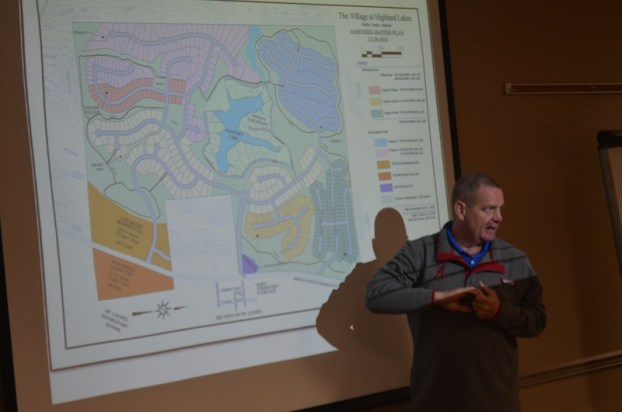 Amendments to The Village at Highland Lakes approved by planning commission

PELHAM – At the final planning commission meeting of the 2016 calendar year, on Dec. 5 2016, the Shelby County Planning Commission voted to continue a case regarding proposed amendment to The Village at Highland Lakes master plan “to accommodate necessary grading.” The continuance was requested by Wayne Standifer of Eddleman Development Corps, as he made clear there were questions from home owners about the proposed amendments that the company felt compelled to answer before moving forward.

On Jan. 17, the case was brought back before the planning commission. The Village at Highland Lakes Master Plan, originally proposed in 2003, has had three approved amendments since that time, with the most recent being in 2013. This proposed amendment called for three changes to the 2013 plan. Those being a reconfiguration of road layouts and the addition of new common area spaces, lot reconfiguration and a reduced number of lots, and absorption of unusable common area.

The proposed road layout changes would primarily affect the southwestern section of the development, where the proposed plans would change road layouts “significantly” according to senior planner Sharman Brooks. Road layouts would change from a more concentric style to a more linear style, according to Brooks, which would create the presence of cul-de-sacs in that portion of the development.

“During the spring of 2015, Spectrum Environmental delineated some jurisdictional waters and wetlands in the southwestern corner of the project,” senior planner Sharman Brooks said.

The proposed amended master plan takes these wetlands into consideration, and eliminates developments within those areas, while a trail has been incorporated in that area.

The proposed amended plan also called for the increase in size of a preexisting detention pond, which further reduced the number of lots.

“The design engineer and developer identified that it would be better to remove the proposed lots (around the detention pond) so that we had more area to work with our detention,” Brooks said.

The removal of certain lots and the reconfiguration of some of the roads led to a certain amount of lot configuration within the remaining lots, particularly within the southwestern section of the development, Phase Four.

In total, 29 lots were proposed to be reduced from Phase Four.

In regards to the proposed absorption of unusable common area, there was discussion regarding a handful of lots abutting the Highland Lakes development on the western property line.

“Due to topographic constraints the lots have been reconfigured to eliminate this unusable common area,” Brooks said. “The developer has provided larger 90-foot lots adjacent to the Highland Lakes line.”

Earlier proposed mass grading is also no longer being called for in the back area of the property, as it is no longer cost-effective.

“Sometimes you have to take what the land gives you,” said owner Doug Eddleman, addressing the commission. “You can’t just force something on it that won’t work. We’re just trying to go back to more normal sized lots.”

The majority of the proposed amendment was in reference to changes in lot sizes and common area designation, however there were two main concerns brought up by residents present at the meeting that did not directly deal with these elements.

Tom Jury, a resident of the Fowler Lake subdivision, spoke to an already present buffer zone between the houses that back up to the lake. Jury made note that residents of that subdivision would like for that same buffer to be incorporated in to new lots that will be added around Fowler Lake.

“The only request I would have is that they maybe consider giving us the buffer zone that they’ve given around (other homes).”

Jury also made note that if a trail comes through the area in close proximity to homes around the lake, “We’re going to have a summer full of kids we’re not responsible for,” he said. “And that kind of concerns us only from a liability standpoint.”

Jury’s request for the same buffer area to be provided to the new lots was answered by Eddleman, who made clear that efforts would be taken to make sure any trail would be placed on the correct side of an already-existing fence that surrounds the lake.

Terry Stiles Harrison, who also lives in the subdivision, spoke to the issue of drainage in the area, and voiced concern that runoff that is supposed to flow into a designated water basin is being dumped into the lake.

Steve Castleman of Spectrum Environmental in Alabaster spoke to Harrison’s concern. Castleman noted the increase in size of the existing detention pond will help with the runoff, as will the efforts that are being taken to work on controlling erosion at its point of origin, as opposed to at the lowest point, namely close to the lake.

After hearing from all residents who wished to voice an opinion, the planning commission voted to approve the amended master plan, provided the bullet points the commission had were met. Commissioner Bob Land abstained from the vote.

The commission also voted to approve a request from Candice Bryant for resubdivision of a small lot located off Shelby County 47. The new subdivision will include two lots, one already existing plus a new lot, where a mobile home will be added.

Pelham — The Pelham Police Department, in conjunction with the Bureau of Alcohol, Tobacco, Firearms and Explosives and the National... read more