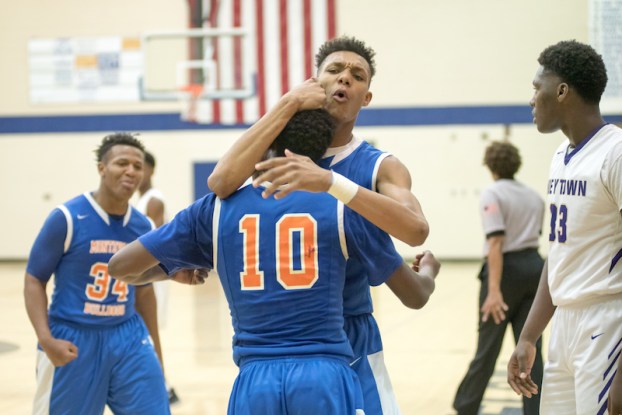 Da’Shaunte Smith hugs Tavarus Hall, No. 10. Hall has established himself as a second go-to player on the team and came up just short of a triple-double against Southside Selma. (Reporter Photo/Keith McCoy)

MONTEVALLO – For the most part this year, it has been Da’Shaunte Smith who has led Montevallo out of the gates to an impressive 12-4 start on the season as he has averaged more than 20 points per game and is putting up more than five rebounds and five assists per game as well.

On Tuesday, Jan. 17, while Smith had another impressive performance that saw similar numbers, Tavarus Hall stepped up and proved that he could be a second go to guy as he was extremely close to a triple-double in the Bulldogs’ 72-59 area win over Southside Selma.

Hall ended the game with 17 points, nine rebounds and eight assists to lead Montevallo, who is now 13-4 overall and 3-0 in area play. The senior has really impressed as of late scoring 19, 16, 11 and now 17 in his last four games. With Smith having another good game adding 16 points, six rebounds and six assists, the Bulldogs have created a dynamic duo with a lot of chemistry.

You might think the team’s success stops there, but you’d be wrong. Daqwan Bryant has had back-to-back games with double digits as well, posting 17 against Southside after going 5-6 from behind the arc. Caleb Cottingham also added nine points and eight rebounds.

Montevallo scored 15-plus points in every quarter of the game and held Southside to less than 14 points in all but one quarter.

The first two quarters were relatively close as the Bulldogs took a 31-26 lead into the half.

As good as the offense was for Montevallo in the first half, it looked even better in the second. They came out in the third and put up 19 points to Southside’s 12 to cushion their lead at 50-38 heading to the final quarter of play.

The 3-0 start in area play has the Bulldogs as the favorite to win the regular season championship and host the area tournament early in February.

From Staff Reports PELHAM, Ala. – The Pelham Civic Complex has confirmed that the seventh annual Iron Cup will be... read more