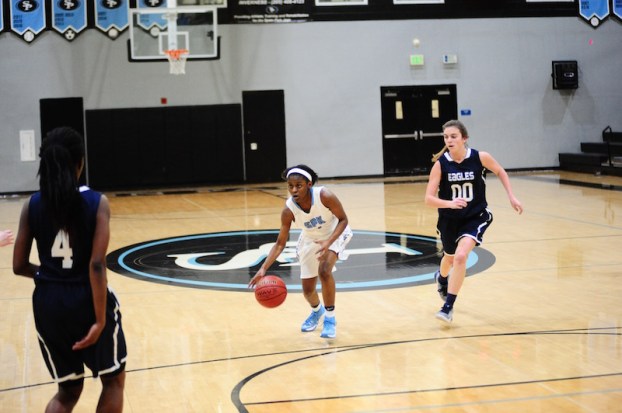 Spain Park’s Ahrielle Parks led the Jags with 19 points in the game and has helped the Jags get off to a 3-0 start in area play. (File)

MOUNTAIN BROOK – The Spain Park Lady Jags were off to a 2-0 area start in the second half of the season and looked to be the front runners in Class 7A Area 6 as they headed into an important matchup with area foe Mountain Brook on Tuesday, Jan. 17. The Spartans came in with a 1-1 area record and looked to bounce back from a 25-point loss to Oak Mountain in their previous game.

The Jags started out slow, but thanks to some hot shooting in the second half from Ahrielle Parks and Claire Holt, Spain Park was able to easily get past the Spartans 62-36.

Mountain Brook opened the game with an early basket, but both defenses played extremely well in the opening minutes before Claire Holt hit Spain Park’s first basket, a 3-pointer, three minutes in, which set off a series of three consecutive 3-pointers between the teams as the Spartans came right back with a three of their own and the Jags followed with another three. After the 3-point barrage Spain Park led 7-5.

Spain Park continued to rely on the three-ball the rest of the half, but only made those first two. With 10 seconds left in the quarter, Whitton Bumgarner grabbed a rebound for the Spartans and dribbled coast to coast to hit a floater as the buzzer sounded to give the Spartans an 11-9 lead at the end of one quarter.

Mountain Brook took advantage of the momentum and continued the run into the second quarter as they eventually extended it to 8-0 to take a 13-9 lead. Parks finally ended the run with a steal that she took all the way to the basket for an easy layup to make the score 13-11. Mallory Duke hit a 3-pointer for the Jags on their next possession that bounced off the back board and rolled around the rim twice before falling in.

The middle of the second became a free throw shooting display as neither team could keep from fouling. At one point 11 straight points were scored from the free throw line between the two teams. This eventually led to the Lady Jags holding a 26-20 lead before Parks drained a close to NBA range 3-pointer with five seconds left in the half to give Spain Park a 29-20 advantage. Parks exploded for 12 points in the first half.

“Somehow we scratched a plus-nine at the half,” Chase said of the first half struggle. “We were terrible at the 3-point line in the first half and most of them were wide open so it was a little frustrating.”

Parks started the third in similar fashion as she hit another deep jumper for the Jags, which sparked an impressive run for the visiting team. Holt hit back-to-back shots from behind the arc and Parks added another to put Spain Park up 44-22 very quickly. They started the quarter on a 15-2 run and ended it on a 21-8 run to take a large 50-28 advantage into the final frame.

“Tonight it was the third quarter,” Chase said of his team’s impressive run. “I kinda went in and chewed them out a little bit, and we came out and got away from our press, but extended a little bit more at the half court and finally started making some threes.”

Not much changed in the final quarter as the Jags started the fourth on a 9-2 run behind a couple of more threes and several offensive boards that gave them great second chance opportunities. Between the second and third quarters they ended the game on a 33-16 run to win by the final of 62-36.

In all, Spain Park had eight players score in the game and were led by 19 from Parks. Claire Holt also added 15 to give the Jags two significant offensive scorers as both found their stroke from deep.

The Jags are now in the driver’s seat of Class 7A Area 6 with a 3-0 start in area play after taking down all three of their area foes in the last week.

By ALEC ETHEREDGE | Sports Editor MONTEVALLO – For the most part this year, it has been Da’Shaunte Smith who... read more