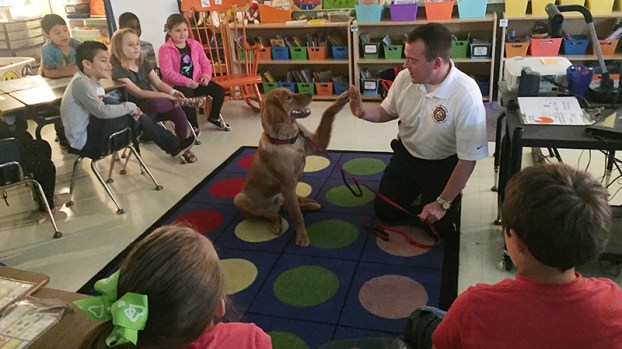 ALABASTER – The Alabaster Fire Department has a new four-legged representative named Marshal, helping to connect with individuals young and old.

The 18-month Golden Retriever is part of the department’s Community Risk Reduction Program, and recently completed a six-week training program.

“In the program, Marshal learned to stop, drop, and roll,” said Alabaster Fire Chief Jim Golden. “He can also get low and go, which is something we teach kids regarding fire safety. If there is ever a situation with a fire, we teach them to get as low as they possibly can and crawl to the nearest exit. Marshal has a telephone and knows how to dial 911, he knows the importance of not playing with lighters and matches, and he can also wave, or give a hug.”

Marshal’s handler, Alabaster Fire Marshal Chief Chip Brantley, works with Marshal, and came up with the idea for the department to have a fire safety dog as an outreach tool.

Marshal is a partnership between the fire department and the Alabaster City School system.

“When Marshal is not out meeting people or visiting local schools, he stays with Chief Brantley at his home,” Golden said. “Marshal went through the six week training program, but he will go through continuous training in the future.”

Golden said since having the dog, the department has seen a great response from the community.

“Having Marshal has been a way we can connect with the kids when we are teaching them about fire safety,” Golden said. “Our firefighters present the information to the kids, and then we usually have Marshal come out and demonstrate the material we are talking about, and we have found the kids respond well to that.”

While Marshal does not live at the fire station, Golden said he is frequently out visiting individuals throughout the community.

So far, Marshal has made appearances at various schools, the Alabaster Senior Center and different public events.

By EMILY REED / Special to the Reporter ALABASTER – An eight-week course aimed at teaching parents ways to strengthen... read more