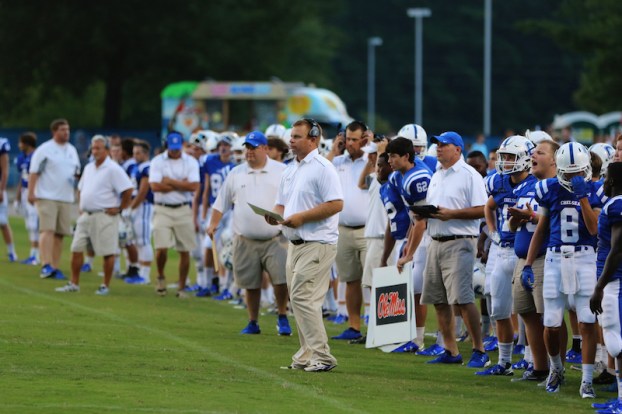 Elmore focusing on safety of players

CHELSEA – One of the most controversial topics at any level of football right now is the increased rate of concussions and Chronic Traumatic Encephalopathy, better known as CTE. Chelsea Hornets head football coach Chris Elmore has taken note and wants to do everything he can to not only make his players safer on the football field, but preserve the game of football in the long run.

Recently Elmore invited Scott Petters, founder of SAFE football, down to Chelsea High School for a coaches clinic so Elmore and his staff could get some pointers on how to make improvements and keep his team safe while on the football field.

“I had heard Scott speak at a couple of different coaches clinics and both times I heard him there were a lot of different things that made sense because he kept talking about how to take the head out of the game,” Elmore said. “He said several times that he wished he would’ve known this stuff while he was younger because it would have saved him a lot of wear and tear on his body.” 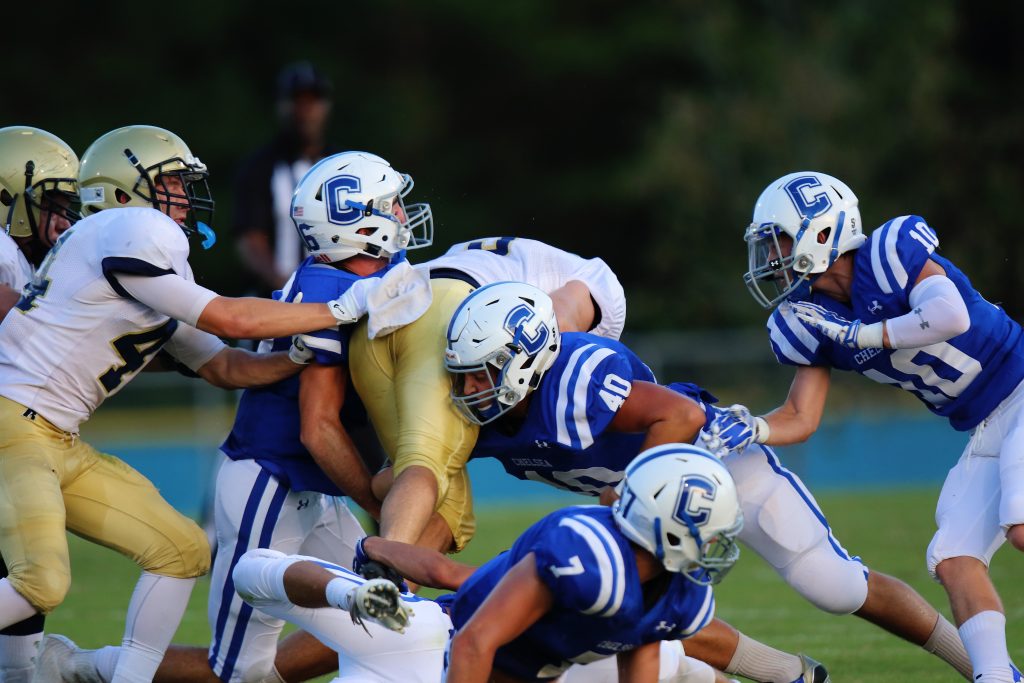 Peters went to Arizona State and was a fourth-round pick by the Philadelphia Eagles back in 2002. He went on to spend seven seasons in the NFL as an offensive lineman before retiring in 2009.

From football to MMA

After his stint in the NFL Peters got interested in martial arts and Brazilian jiu-jitsu.

“I decided I wanted to make that my next step after football so I started training with guys and really enjoyed it,” Peters said. “One thing I quickly realized, as a former offensive lineman, was that you’re going to get humiliated no matter what your weight and size are.”

Once he got familiar with the techniques involved with fighting he started competing and actually ended up winning two world championships in submission grappling.

“I ended up beating a guy named Tommy Rowlands, who was one of the most decorated wrestlers in the country out of Ohio State,” Peters said. “Nobody was expecting it, but people took notice of it.”

Of those people that took notice were Brock Lesnar and Cain Velasquez, two of the most decorated fighters in UFC History. Each of them, as well as others, were so impressed by what he had done and how he went about doing it that they wanted him to come help train for upcoming fights.

He opened up his own MMA training center known as Fight Ready for a short period of time before shifting his focus back to his true love of football.

In 2012, Peters got back to his true passion of football.

“My passion was football so I wanted to get back into that,” he said. “I wanted to take what I learned in the MMA and use it to elevate the level of knowledge when it comes to keeping guys safe and keep them from using their helmet as a tool.

Peters was hired by The University of Washington in 2012 to help train the team and did that for both the 2012 and 2013 seasons. After the 2013 season Washington called Peters to let him know that in his two years with the program the Huskies had basically zero concussions and stingers through the two football seasons.

“At that point I wanted to get involved with players and share these tips to help them stay safe and most importantly I really wanted to preserve the game so working with younger players at all levels was important to me,” Peters said. “The tips and adjustments are small, but yield some incredible results.”

He has now worked with more than 450 schools nationwide, as well as a lot of youth programs and says the results are consistent with every place he has been, which is fewer concussions.

Peters said his time in the MMA really helped him realize how much he could help saying that if you take a football player, their motto is always bigger, faster, stronger.

“Most coaches aren’t looking at technique, but instead look at attributes,” Peters said of the focus area of football coaches and players. “The reality is the offseason in the NCAA and NFL are spent lifting weights, not focusing on mechanics and techniques.”

Peters went on to say that with players doing that they are just getting bigger, which creates stronger impacts, but without the right mechanics or techniques they can’t prevent injuries to the head or neck region.

“MMA preparation is different because power comes from the combination of mechanics and speed, not brute force,” Peters said of the two training methods. “You have so much more control of your body when you focus on the proper techniques. You never see a guy running around the octagon with their head down because they know their strength is found in their core down and they practice the techniques to use those muscle groups instead of their head.”

Peters said in a 56-hour work week an MMA fighter spends 27 hours of that time drilling on mechanics, while in the NFL they only spend two percent of their time drilling on technique. The rest is spent weight training, watching film and having physical contact in practice or a game.

Preserving the game, not compromising it

Both Elmore and Peters are big proponents of preserving the game of football and keeping its longevity, and fully believe this is the way to do it.

“If you treat your car like trash you’ll only get so many miles out of it, same goes for football,” Peters said. “If you want a longer, healthier career where you’re more efficient, then you have to treat your body right and practice the correct techniques.”

He also pointed out that we don’t have to compromise the physicality or integrity of the game by saying “It needs to be safe, not soft.” 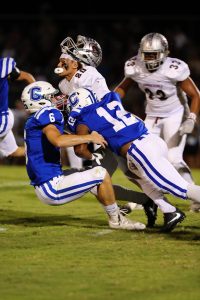 Chelsea’s Kenny Simpson, No. 12, and Zac Young, No. 6, knock a Gardendale players helmet off after a hard hit this year. (File)

Peters had strong praise for coaches like Elmore and what they mean to the sport.

“Coach Elmore took a big time initiative and those are the kinds of coaches that are the future of football because they care about their players and want their kids to go on to do big things in life,” he said. “They step up and say ‘We care about our kids’ and don’t just try to get by with the physical attributes their team has.”

Elmore said he and his staff had been one of the ones that focused on weight lifting and conditioning in the offseason instead of technique, but now he is going to work with his assistants to implement a plan that they will start immediately this spring to focus on proper techniques as well as weight training and conditioning.