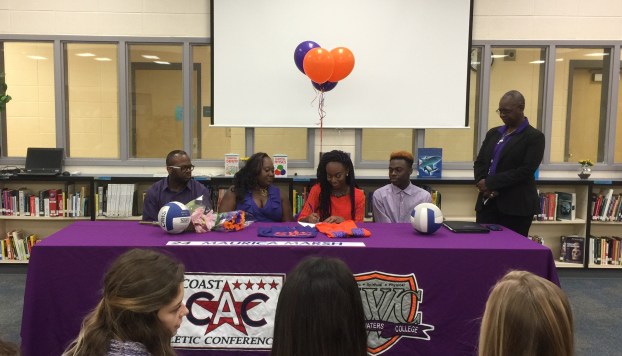 Marsh, pictured with her parents and brother at the table, signs her NLI to play volleyball at Edward Waters College in Jacksonville, Fla. (Contributed)

CHELSEA – Chelsea had one of its’ best volleyball seasons in the history of their program under the direction of head coach Jessica Pickett and it is clearly showing off as several players have signed their National Letter of Intent to play at the next level.

On Friday, Jan. 13, Maurica Marsh became the fourth of six seniors to sign her NLI to play college volleyball when she signed with Edward Waters College in Jacksonville, Florida. She joined Lexie Riggins, Taylor Hackett and Princes Embry as Chelsea players that have decided to continue their playing career in collegiate volleyball.

The signing was held at the Chelsea High School Library with Marsh, Pickett, her parents, brother and Edward Waters head coach Marilyn Mack all in attendance for her big day.

Marsh was an instrumental part of the Hornets’ 2016 season at the middle blocker position. She racked up a total of 202 kills, 105 blocks, 92 digs and 59 aces in her career on the varsity squad

Edward Waters competes in the Gulf Coast Athletic Conference and finished this past season at the 9-13 mark, but Marsh will look to continue her high school success and help bring Waters a GCAC championship.