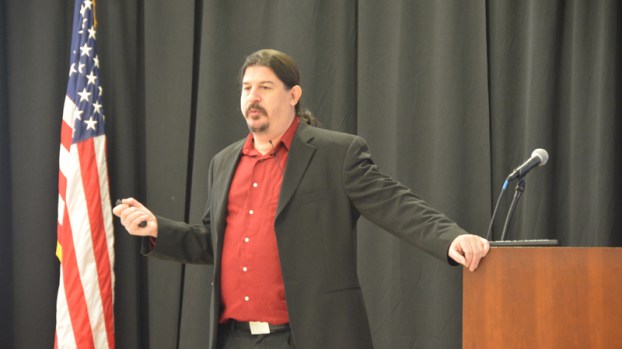 The JSCC Police Department and Gulf Coast High Intensity Drug Trafficking Area co-hosted the free training, which was provided by Billy Robinson with the Louisiana Department of Health.

A morning and an afternoon session were offered for firefighters, police officers, health care personnel and any other stakeholders.

“More people are dying from overdoses from opioids than from gunshots and car wrecks,” Hawkins said.

Bailey said the problem is especially hard on small departments, which must find a way to fund the purchase of opioid reversal drugs, which are expensive and have a relatively short shelf life.

“We’re going to have to find a way to get the funding,” Bailey said. “I don’t see this problem going away.”

Robinson told those in attendance that opioid use often involves people sharing needles, which can lead to outbreaks of blood borne illnesses, such as HIV.

Contaminated needles also pose a risk to emergency officials, such as police and nurses, who come into contact with users.

Robinson said 61 percent of opioid overdose deaths are attributable to prescription substances. As tolerance is built up while someone is using the drug, they form a dependence that results in “transition.”

Prescriptions are written for a flat amount, but a user needs more and more—or are cut off for exhibiting drug seeking behavior.

The user then goes to another doctor or seeks another substance, such as heroin, which can be cheap and readily available.

“You don’t just go off of prescription opioids,” Robinson said.

A particularly potent opioid is Fentanyl, which is thought to be 50 times more powerful than heroin.

Fentanyl was originally marketed as safe because it was intended to be consumed slowly, but it is now mass produced in China.

Participants watched a video produced by the Drug Enforcement Agency where two police officers talked about coming into contact with Fentanyl. Though they inhaled only a small amount, the symptoms caused them to think they were dying.

“This is a personal safety risk for you all,” Robinson said.