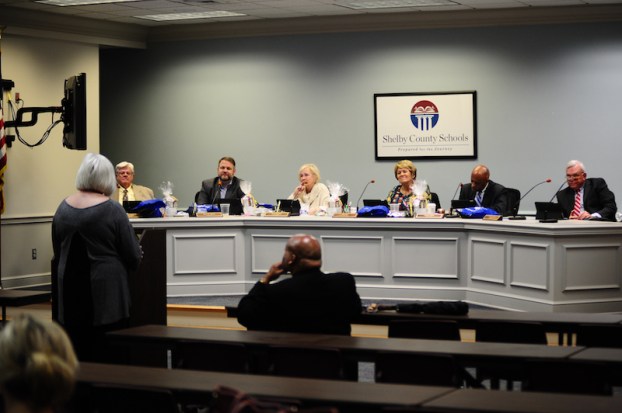 The Shelby County Board of Education listens to a presentation regarding the Helena City Schools during its Jan. 19 board meeting. (Reporter Photo / Baker Ellis)

COLUMBIANA – The Shelby County Board of Education met for the first time in the 2017 calendar year on Jan. 19 with much to celebrate. The meeting came on the heels of the release of Phase I of the Alabama A-F Report Card, which came out in late December of 2016. The Alabama A-F Report Card law, which was passed in 2012, calls for letter grades A through F to be assigned to each school district in December of 2017, when all observable data required has been collected. While letter grades were not assigned at the conclusion of Phase I, the Shelby County School District was one of the highest-achieving districts in the state.

“We have wonderful administrators and teachers in our system who understand what it takes and spend time studying the things they need to do to achieve these results,” Shelby County School Superintendent Randy Fuller said during the meeting. “Everybody we have is on the same page and we continue to work for the betterment of our schools.”

“As a superintendent, from my singular position as I look out across our entire school system, I see something that no one else has in our state,” Fuller continued. “I’m very proud of what everyone has done, because it could not be done if everyone did not understand our goals. It makes me very proud to see us get that recognition.”

Also at the meeting, teachers and faculty from the Helena schools were present and gave an update on some of the programs taking place in their schools. Helena High School principal April Brand spoke specifically to a new lunch program called Pack 60 that allows students to choose

“We created a schedule where students have maximum choices during their lunch period,” Brand said. “They can go eat lunch during the first half of the lunch and tutor during the second or attend a club meeting or sit and read a book or work on homework, or do it all in reverse. Our kids have embraced and have done remarkably well with it.”