PELHAM – An Ensley man was arrested on Sunday, Jan. 15, and charged with first-degree theft of property, first-degree criminal mischief and third-degree burglary in connection with the burglary of Alabama Guns and Outdoors in Pelham on Jan. 13. 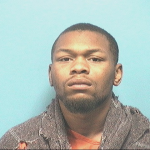 Harris is being held in the Shelby County Jail on bonds totaling $135,000.

According to court documents, Sidontae Tomar Harris, 19, who lists an address in the 2000 block of 25th Street in Ensley, and two other people allegedly committed an armed robbery of a vehicle in Jefferson County on Jan. 12, and then drove that vehicle and one more vehicle to Pelham where they proceeded to ram the stolen vehicle through the entrance of Alabama Guns and Outdoors.

Once inside the business, Harris and the two other people allegedly stole 16 handguns.

Eleven of the stolen handguns are still at large, according to court documents.

On Dec. 6, 2016, Harris was arrested and charged with violation of the State Firearms Act in Jefferson County. He was out of jail on bond at the time of his most recent arrest.

On Jan. 17, the Pelham Police Department, in conjunction with the Bureau of Alcohol, Tobacco, Firearms and Explosives and the National Shooting Sports Foundation offered a $5,000 reward for information that led to the arrest and conviction of those responsible for stealing the firearms.

It is unclear if the arrest was the result of information received from the public.

PELHAM – The Pelham City Council introduced a proposal during a public hearing at its meeting on Tuesday, Jan. 17,... read more