COLUMBIANA – A 40-year-old Kennesaw, Georgia, man is being held in the Shelby County Jail on bonds totaling $500,000 after officers with the Alabama Law Enforcement Agency’s State Bureau of Investigations said he tried to sell thousands of Ecstasy tablets for distribution in Shelby County. 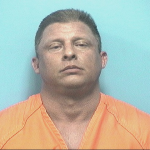 The SBA arrested Woodie Louis Ochle, who lists an address on Dolcetto Trace N.W. in Kennesaw, Georgia, on Jan. 18 and charged him with one felony count of conspiracy to traffic methamphetamine.

Conspiracy to traffic methamphetamine is a Class A felony, according to Alabama law, and is punishable by up to life in prison upon conviction.

According to his arrest warrant, Ochle allegedly struck a deal with a confidential police informant in Shelby County to sell 4,000 Ecstasy pills for $20,000. He was taken into custody after accepting payment for the tablets, his warrant read.

The Shelby County bust is the most recent in a long string of drug-related arrests in multiple states for Ochle.

In its bond recommendation request, the District Attorney’s Office claimed Ochle was in possession of a fraudulent driver’s license “with his picture on it, but not his real name and/or information” at the time of the arrest.

The DA’s office also claimed Ochle is a flight risk because he has a residence in Maine close to the Canadian border, has seven prior arrests in three different states and has a robbery conviction in Georgia.

Ochle’s Shelby County arrest marks at least the second time he has been arrested on drug charges in the past several months.

In April 2016, the Panama City Beach Police Department arrested Ochle on charges of possession of Xanax with intent to distribute, trafficking in Ecstasy and trafficking in methamphetamine. He allegedly was attempting to have a large quantity of narcotics delivered to him in Panama City Beach to be distributed at the “Spring Weekend” music festival in the city, according to the WMBB television station in Panama City.

The future workforce: HIS students participate in Career Day

By GRAHAM BROOKS / Staff Writer HELENA–Comments of “Ew” and “Wow” could be heard from Helena Intermediate School students on... read more