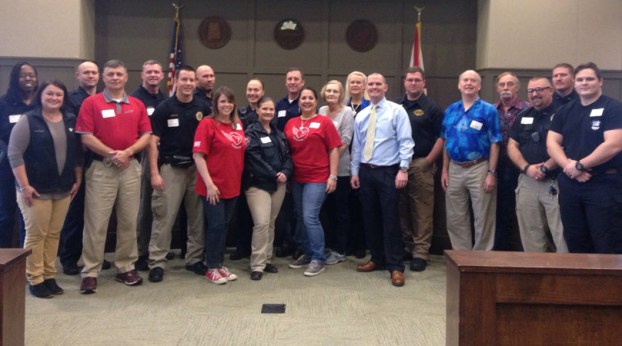 First responders from Alabaster and nearby areas learned how to better interact with people affected by autism at a training session at Alabaster City Hall. (Reporter Photo/Amalia Kortright)

First responders in Shelby County and surrounding areas attended a training session on handling situations involving civilians on the autism spectrum at Alabaster City Hall on Friday, Jan. 20 from 9 a.m. to 2 p.m. The session was lead by Interaction Advisory Group president and cofounder Dustin Chandler.

“We are training first responders on how to have safer and better interactions with people on the autism spectrum and people with developmental disabilities,” Chandler said.

During the session, first responders learned about what autism is, how to recognize signs of autism and how to properly communicate with those affected by autism.

According to the Center for Disease Control and Prevention, autism is a neurodevelopmental disorder. One in 68 children in the United States are affected by autism. Chandler said no two cases of autism are alike, and autism affects people in varying degrees.

“Autism is one of the largest developmental disabilities. We know that, in our communities, there are children with autism and adults with autism,” Chandler said. “Some are very independent, and some who more dependent and require 24-hour care.”

Chandler said those who attended the training session would have a better understanding of how to identify and communicate with civilians affected by autism and avoid misunderstandings.

“This is to keep everybody safe, and teach them about how to recognize certain behaviors and communicate with people who are on the spectrum,” Chandler said.

“Sometimes you can have a person who is verbal, and in stressful or high-anxiety situations, they become non-verbal. Sometimes, these behaviors associated with autism will make it seem like they’re on drugs or something.”

Chandler said the session also served to raise awareness about autism in the community.

“We’ve had people in Alabama, who are in law enforcement, who have never even heard of autism, not necessarily here,” Chandler said.

“We want to give our officers the best knowledge we can to keep themselves safe and keep our citizens safe and treat them fairly,” Chandler said. “Where are parents [of children with autism] out here, and we want them to know this is for the benefit of their families.”

The session was sponsored by the Autism Society of Alabama and organized by the Angel Warriors Foundation, an Alabaster-based nonprofit organization.