Jackson brings the best out of students

NORTH SHELBY – Vicki Jackson’s mother found one of her daughter’s notebooks from third grade in which she wrote that she wanted to be a teacher. 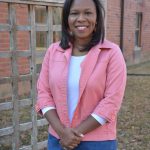 But for Jackson, the decision was reached later, in ninth grade, thanks to the mentorship of a teacher that insisted she reach her potential.

Regardless of when Jackson decided on her career, there is no doubt now that it is her calling.

OMMS Principal Larry Haynes hired Jackson, fresh off of graduation from the University of Montevallo, early in his tenure as head of the school.

“We knew then she was special,” Haynes said. “She had such a burning desire to teach and work with kids.”

Jackson said she was not a good math student in school, even hiding papers so her parents would not see her grades.

“My parents ended up catching up with that,” Jackson said.

In ninth grade, Marion Miles, a retired college professor who taught at Central Park Christian in Birmingham, helped bring the best out of Jackson, who said she was “intimidated” by Miles.

“She didn’t let me off the hook,” Jackson said. “All of a sudden, it just started making sense.”

Jackson said her job is perhaps most gratifying when students begin her classes who think they dislike math—but come to appreciate the subject or even enjoy it.

“They think about math being sitting at your desk taking notes,” she said. “Math is more problem solving and reasoning. I love incorporating real-world problems. A lot of my students are interested in construction, engineering, interior design—I show them the connection to that.”

Jackson and her husband, Quan, have a daughter, Alana, who is a fourth grader at Oak Mountain.

Alana has given Jackson and even deeper appreciation of her responsibility as a teacher, Jackson said.

“You look at these kids as they are somebody’s child,” she said.

Jackson said she appreciates the support from her administration and students’ parents. She referenced a recent effort to raise money through an online service for a set of Google Chromebooks for her classroom.

“Within two days, my project was funded,” Jackson said. “It shows the type of support we have here.”

Jackson was nominated as her school’s teacher of the year by co-workers, who then voted on the selection. Jackson said she was honored her peers thought highly of her.

As her school’s nomination, Jackson wrote essays about her efforts, and district committee representatives visited the school to interview students, other teachers and administrators.

Haynes said Jackson makes a difference in a number of ways. One example is her willingness to spend extra time helping students.

“She has a classroom full of students 45 minutes before school starts, and then she stays late to help,” Haynes said. “Even some high school students come back for help. She can bring the best out of any student. They love her. She has just such a pleasant demeanor. She’s infectious with what she does. She’s awesome.”