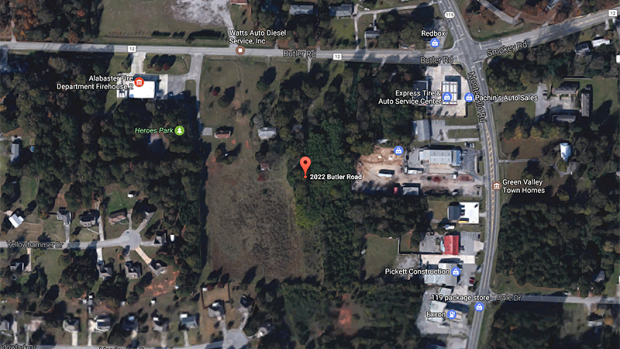 Alabaster leaders voted to move forward with demolishing a pair of abandoned houses at 2022 and 2040 Butler Road following a mid-March public hearing on the matter. (Contributed)

ALABASTER – A pair of long-abandoned homes on overgrown lots off Butler Road in Alabaster soon may be torn down, after the City Council set a mid-February public hearing on the matter during its Jan. 23 meeting.

The city’s Housing Abatement Board has already reviewed the matter, and has proposed the homes be demolished. After the public hearing on Feb. 13, the City Council likely will vote on the matter the same night.

“These houses have been abandoned forever,” Benson said as he scrolled through several photos showing the dilapidated state of the properties. “The lots are so overgrown that you may not even know the houses are there.”

If the City Council agrees during the Feb. 13 meeting to demolish the homes, the city will fund the demolition and attach the cost as a lien on the property. The lien would have to be repaid to the city if the property is sold in the future.

Benson said the two properties are owned by the same people, who are in favor of the city tearing them down.

“The same people own both of these, and there is no resistance at all to us doing this,” Benson said. “These are going to be expensive (to demolish), because they’re big houses. It will cost a fair amount to even get to them.”

If the council approves the demolitions, crews will be able to move forward after a 30-day grace period, said Alabaster City Attorney Jeff Brumlow.