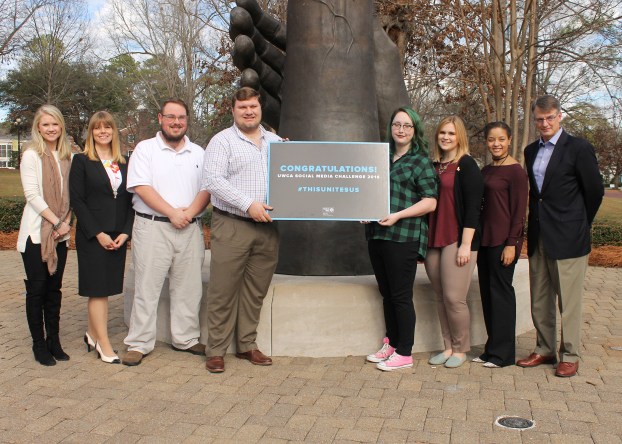 On Jan. 13, a team of University of Montevallo students accepted a $2,500 check for winning United Way of Central Alabama’s inaugural social media challenge.

The competition, sponsored by Birmingham-based marketing firm blr/further, challenged five University teams to use the hashtag #ThisUnitesUs to create a successful social media campaign to broaden United Way of Central Alabama’s reach to the millennial generation.

The idea to participate was first passed to Dr. Amiee Mellon, assistant professor of marketing and service learning coordinator. Rather than recruit solely from her program, Mellon reached out to Assistant Professor of Communication Dr. Tiffany Wang to also recruit students from communication studies.

According to Mellon, this versatility in degrees and interests gave the team a distinct edge.

“They pulled in all the experiences they had from a wonderful public liberal arts school like the University of Montevallo in order to come up with a unique campaign,” Mellon said.

After successfully presenting their campaign proposal to both United Way and blr/further members, the Falcon Five set to work. The UM students utilized Facebook and Instagram to deliver their message.

The team wanted their campaign to reflect the natural spirit of giving and philanthropy found on the brick streets of the University.

“Generally, the idea we started with was comparing and contrasting the ideas of United Way to Montevallo,” Saverse said. “Obviously, Montevallo is a really great community that comes together to help each other out. United Way is just that, but on a much larger scale.”

To do this, they highlighted the work of local nonprofits like Shelby Emergency Assistance, Arc of Shelby County and Owens House, which all directly benefit from donations to United Way.

According to Chip Graham, the senior vice president of marketing and communications for United Way, the Falcon Five’s focus on local organizations as well as their community-driven message was exactly what his organization was looking for.

On Jan. 24, the team will present their successful campaign to United Way’s board of directors along with other nonprofit executives during the organization’s annual meeting.

The students said they hope their work and campaign inspires their peers to participate in nonprofit donations and lifelong philanthropy.

“I think it’s important for us to start early on any way we can, whether it’s a couple of dollars or a couple of hours of service to help these groups who are doing these great things,” Saverse said.