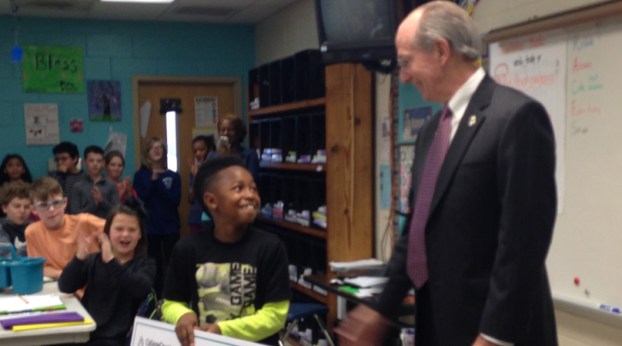 According to TIS art teacher Gaile Randall, the contest was part of a collaborative effort between the TIS art department, the TIS counseling department and state organization CollegeCounts 529.

Randall said every student in the fourth grade wrote essays and drew pictures that represented what they wanted to do when they grew up. Eighteen finalists were selected.

“[Jaden] is the sweetest thing in the whole wide world. He’s always got a smile on his face. He’s very meticulous, and he likes bright colors,” Randall said. “He wrote that he wanted to be an art teacher, and I got a little emotional.

Alabama State Treasurer Young Boozer presented a $529 check to Jaden and his family, which will be put towards his college fund.

“We’re trying to raise awareness about saving for college, so we designed CollegeCounts 529. It’s a combination of raising awareness for our organization and handing out some awards to some very talented young people,” Boozer said. “We’re excited about being here and Jaden is a very worthy and a very talented recipient.”

Alabaster City Schools superintendent Wayne Vickers said he supports the efforts of the CollegeCounts 529 program, and encouraged TIS parents to get involved with it.

“It’s never too early to early to start saving for college. The plan that they’re trying to get out there is so important, and we want all of our families to look into it and take advantage of it.”

Vickers said he is glad to see the accomplishments of students in the Alabaster City Schools system, and is thankful for the support of TIS parents and faculty.

“We’re so proud of Jaden. What a great piece of artwork and essay that he provided,” Vickers said. “This just shows the quality of kids that we have in Alabaster City Schools. We have great students and great parents.”

Jaden said he plans to be an artist when he grows up, because he enjoys drawing.

“I wrote about how I wanted to be an artist when I grow up. I drew me painting something and getting a perfect angle of it,” Jaden said. “I want to thank everybody for coming and for supporting me.”