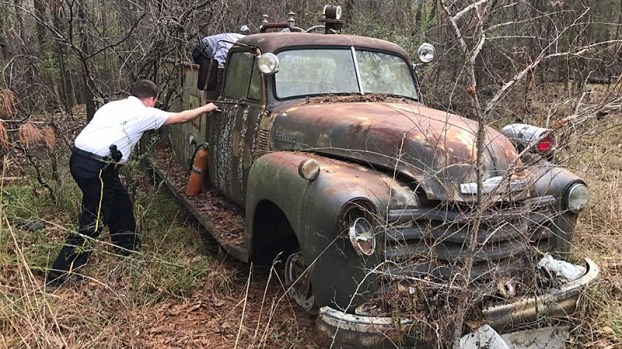 ALABASTER – After recently acquiring the first fire engine used in the city of Alabaster, the Alabaster Fire Department is seeking the community’s help in working to restore the piece of history.

“We found the truck about 150 yards off of Highway 11 in the woods,” said Alabaster Fire Chief Jim Golden. “It was difficult to see from the road, but it was on some land. We started to track down the owner of the truck and after numerous calls, we made contact, showed interest in getting the truck back, and the owner agreed to donate the fire engine back to us.”

AFD began the process of having the truck removed from the woods and had a wrecker come and help load the 1952 Chevrolet truck to take to Firehouse No. 3.

“The truck has a lot of sentimental value to us,” Golden said. “It is just really neat to be able to locate the first fire engine that the city used. The truck is in remarkably good condition for it to have been sitting outside for close to 20 years.”

Vini Madrigal, owner of Vini’s Hot Rods in Alabaster found out about the fire department’s efforts to restore the fire truck and agreed to help with the project.

“Right now, we are currently trying to raise donations to secure supplies and materials needed to restore the truck,” Golden said. “We are solely raising money from the community for the supplies, and will not be using any budgeted money for emergency operations. Vini is going to work on it, and our firefighters will be helping out with the restoration during their off time.”

The fire department has created a Gofundme account for anyone in the community wishing to donate toward the restoration.

“Once the restoration is complete, we hope to be able to use the truck for fire prevention, in our Community Risk Reduction program, and use it in parades,” Golden said. “We think this is a valuable piece of our community’s history, and we want to preserve that. We want this to be something that the community embraces, and can be proud of.”

Golden is still working to piece together the history of the truck, but has found out the truck was likely sold or auctioned off in the early 1990s.

“The truck was removed from service from the fire department and used by the Public Works Department for some different projects,” Golden said. “It was eventually removed from service altogether, and we still have not gotten concrete information as to how it came into the person’s possession who later purchased it.”

Golden said he is also working to track down original photos of the truck.

“We just feel very blessed to be able to have this in our possession, and we look forward to having it restored,” Golden said.

For more information about the restoration visit the Alabaster Fire Department’s Facebook page or to donate, visit GoFundMe.com/AFDEngine1.

ATEF works to help the incarcerated