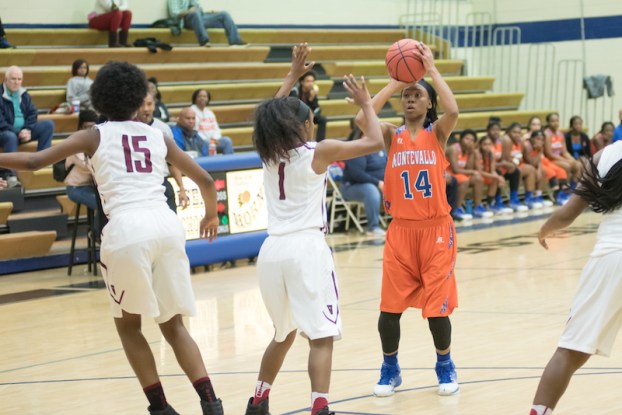 Lauryn Lilly had a game-high 28 points to lead Montevallo to a win over No. 4 Montgomery Academy. (Reporter Photo/Keith McCoy)

No. 10 Montevallo takes down No. 4 Montgomery Academy

MONTEVALLO – Lauryn Lilly has been one of the better girls basketball players across Shelby County over the past two seasons and she continued to show why on Tuesday, Jan. 24, as she dropped 28 points to help lead Montevallo to a thrilling top-10 win over Montgomery Academy 52-48.

“We had two starters foul out in the game, but Kayleon Lamar and DeAnna Gilliland came off the bench and did an outstanding defensive job for us, which was key in the win,” Montevallo head coach Tina Niven said.

Montevallo (17-5, 4-1) came out of the gates strong in the first quarter and it looked like it was going to be all Bulldogs as they started the game on an 18-10 run and created a small cushion early on.

Over the next two quarters, however, things would change. Montgomery Academy fought back in a big way on the defensive end holding Montevallo to just eight points in the second quarter. The Lady Eagles didn’t really light up the score book, but their 13 points were still enough to get them back in the game thanks to the defensive effort. They trimmed the lead to three and only trailed 26-23 at the break.

This trend continued into the second half as Montgomery Academy still didn’t find much offensive firepower, but their defense was relentless and held the Lady Bulldogs to a game-low seven points in the quarter. The Eagles outscored them 11-7 in the quarter to take a 34-33 lead into the final quarter of play.

Finally, in the fourth, Montevallo woke back up on the offensive end and went on a run. They had outscored the Eagles 17-12 going into the final 20 seconds of the game and grabbed a 50-46 lead. Shamia Smith hit two key free throws with six seconds left to play to extend that lead to 52-46 before Montgomery Academy hit a layup in the final second to make the final 52-48.

Montevallo’s offense really figured out the Eagles’ defense in the fourth quarter posting a game-high 19 points in the final frame. The defense was never the problem as they didn’t allow more than 14 points in a single quarter during the game.

“Alasha Reed played strong defense against all-state guard Jade Brooks holding her to just 12 points,” Niven said of why Montevallo was able to hold the Eagles in check.

By ALEC ETHERDGE | Sports Editor PELHAM – It may have seemed like a foregone conclusion coming into the season... read more