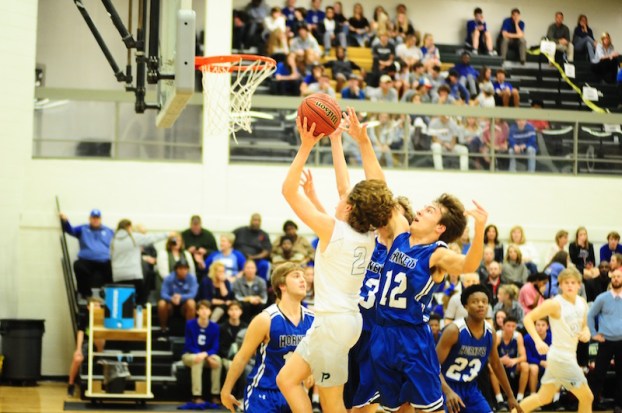 Pelham’s Justin Allison goes up for a layup after getting past the Chelsea defenders. (Reporter photo/Alec Etheredge)

PELHAM – It may have seemed like a foregone conclusion coming into the season that Pelham would be the favorite to take home the Class 6A Area 8 crown with Alabama signee Alex Reese and rising junior Justin Allison leading the way, but what a lot didn’t see coming was how good Chelsea and Helena would be at challenging the Panthers.

At one point this year all three of those teams were ranked in the top 10 of the 6A rankings, including Pelham and Helena taking the top two spots. Despite that, after taking down Chelsea 62-50 on Tuesday, Jan. 24, the Panthers were able to finish area play with two wins over both the Hornets and Huskies for a perfect 4-0 record.

“It’s really big for us,” Pelham head coach Joel Floyd said of the perfect area record. “Battle tested is something we are going to be. Our area is one of the top area’s in all of 6A across the state, so it certainly prepared us for the future.”

In the first matchup, Pelham looked like the better as Chelsea struggled to get any sort of momentum. However, the second time around, Chelsea fared much better against the Panthers and put up a tough fight, but a third quarter run did them in as they fell 62-50.

The game started out fast early in the first quarter with both teams sprinting up and down the court, but both were turning it over and missing layups. Finally, another fast break led to the game’s first points as Pelham’s Seth Torman got a steal and sprinted up the floor. With Reese trailing shortly behind, Torman lobbed the ball off the glass for a monster alley-oop dunk by Reese to start the game with enthusiasm.

This gave the Panthers some momentum as they started the game on an 8-2 run and the flashbacks had to be starting early for Chelsea. Fortunately for the Hornets, they weren’t folding early in this one. Bailey Hix and Tyler Coleman hit back-to-back 3-pointers to keep up and only trail 14-10 after the first quarter.

Chelsea continued their strong play into the second. Torman got another steal and it looked like he would have an easy layup to extend Pelham’s lead early in the quarter, but he left it short, which led to a fast break for the Hornets and a transition 3-pointer by senior leader Joseph Lanzi. Chelsea got another stop on the next possession and came right back down to hit another jumper, which gave them their first lead of the game at 15-14.

Reese answered the Hornets’ run with a 5-0 run by himself after hitting a jumper and following that up with an and-1 to give the Panthers a 19-15 lead. After Chelsea hit a jump shot, Reese got big grabbing three offensive boards before putting one in to give him a 7-2 run over a short span of time.

The rest of the quarter was extremely entertaining as the Panthers grabbed a 24-20 lead before Chelsea’s Tyler Coleman scored four unanswered points to tie the game up with less than a minute before the half. This gave Allison plenty of time to get up the court and grab a last second shot, which he drained from mid-range with less than a second to give Pelham a slim 26-24 lead at the break.

“We practice like we played,” Floyd said of the first half performance. “We didn’t practice with enthusiasm and we didn’t play good with enthusiasm, and Chelsea did a good job of taking some of our stuff away that we wanted to do in that first half.”

It was clear the Panthers’ intensity level wasn’t at 100 percent in the first half, but that quickly changed in half number two. They started the quarter on a quick 6-0 run behind several steals and a Torman dunk. They really came out and got after Chelsea on the defensive end, which led to several fast break opportunities. They went on a 12-2 run in the first three minutes and exploded for 26 points in the quarter, while holding the Hornets to just nine, which gave the Panthers a 52-33 lead after three.

“It was all about defense because that’s all we talked about at halftime,” Floyd said about the difference between the two halves. “Defense, defense, defense. I’m not worried about the offensive end because the defense is going to create things for us offensively and it did as we went on a nice run thanks to our defense.”

Chelsea clawed their way back into it in the fourth behind six early turnovers by Pelham, which led to a quick 10-2 run by the Hornets to get within 11 with five minutes to play. Unfortunately for Chelsea the 19-point deficit after three quarters was just too large to overcome as both teams played even over the past five minutes leading to the 62-50 Pelham victory.

Reese had a game-high 22 points as well as eight rebounds to lead Pelham. Allison also had an impressive stat line adding 19 points three assists, three rebounds and three steals, while Torman added eight points and a handful of steals as well. For Chelsea, Lanzi had a team-high 15 points while Tyler Coleman added 11.

“We have one goal in mind so we are continuing to work towards that,” Floyd said of his team’s focus finishing the season and heading into the post season.

By ALEC ETHEREDGE | Sports Editor AUBURN – Chip Lindsey has had a storied coaching career and is now headed... read more