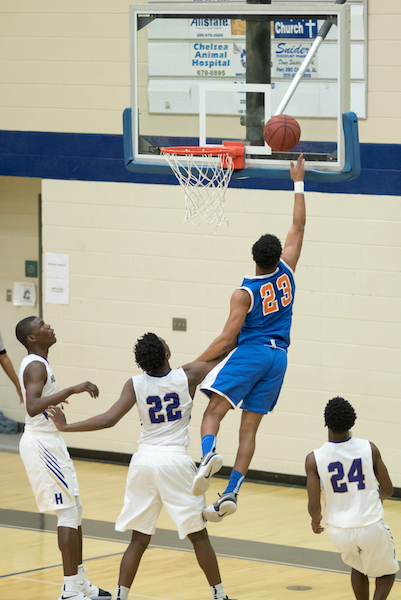 Da’Shaunte Smith not only had a game-high 25 points, but nearly had a quadruple-double in the game. (Reporter Photo/Keith McCoy)

MONTEVALLO – A near quadruple-double by Da’Shaunte Smith gave Montevallo a big 72-60 win over area foe Montgomery Academy on Tuesday Jan. 24, which moved them to 5-0 in area play.

With every team in the area now having two losses and only one possible loss left for Montevallo (16-4, 5-0), they officially locked up the regular season area championship and will host the area tournament in a couple of weeks.

Over the past couple of weeks, Tavarus Hall had stepped up and proven himself as a second go-to scorer and playmaker for the Bulldogs, but with Hall in foul trouble Smith took control of the game to post 25 points, 10 blocks, eight rebounds and five assists. Sure that five assists may seem a ways away from double digits, but in reality to get five plus in all four of those categories is extremely rare and to come that close to a quadruple-double is also unheard of.

Early in the game it looked like it was going to be a tough night for Montevallo as Montgomery Academy came out clicking on all cylinders to build a 22-14 lead after one quarter of play.

This wasn’t the start head coach Gregory Dickinson and Montevallo wanted, but Dickinson was much more improved with the second quarter effort as they turned up the pressure on both ends of the court turning defense into offense. The Bulldogs put up 24 points in the quarter and held the Eagles to just 16 as they tied the game up at 38 going into the half.

Montevallo’s offense didn’t look quite as strong in the third quarter, but the defense looked the best it looked all night holding Montgomery Academy to just 10 points in the frame. The Bulldog’s put up 14 to grab a small 52-48 lead heading to the final quarter.

The defense kept up the pressure in the fourth and the offense got back on the same page it was on in the second quarter. Montevallo put up 20 more points in the quarter and held the Eagles to just 12 points on the defensive end, which led to the 72-60 final score.

It was clear the defense stepped up in the second half and was the difference maker in the game as they held Montgomery Academy to just 22 points, which was equivalent to their first-quarter total.

Smith was the game’s leading scorer with his 25 points and with Hall in foul trouble, TreShawn Brown stepped up to post a second double-double for the Bulldogs with 12 points and 20 rebounds in the contest. Joseph Cardoza also added nine points. Montgomery Academy was led by Garrett Sanderson and Landon Crave with 22 and 13 points, respectively.

No. 10 Montevallo takes down No. 4 Montgomery Academy

By ALEC ETHEREDGE | Sports Editor MONTEVALLO – Lauryn Lilly has been one of the better girls basketball players across... read more