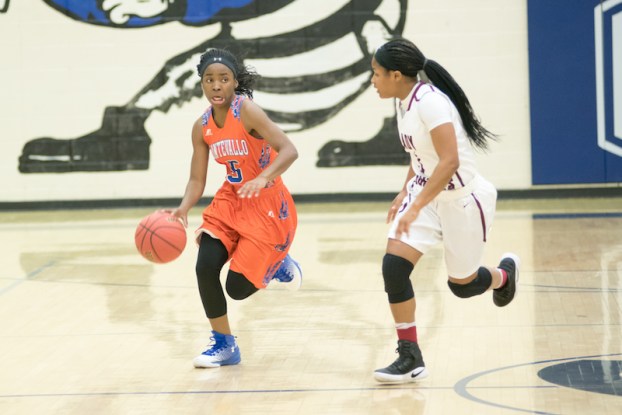 Montevallo’s girls basketball squad jumped to No. 9 in the latest ASWA basketball rankings after a win over No. 4 Montgomery Academy on Jan. 24. (File)

Montevallo and Spain Park have seemed like automatics for a top 10 spot this entire year and both remained ranked in the most recent ASWA girls basketball rankings.

Spain Park remained the highest ranked girls team in the county as they came in at No. 6 in a very difficult 7A classification. Sitting behind teams like Sparkman, Hoover and Gadsden City, the Jags (16-8, 5-0) have proven to be one of the better teams in the state.

They have completely dominated their area winning by an average of 27. 4 points in their five area wins. The closest area contest for Spain Park came in a 70-57 win over Huffman. The Jags have now won five of their past six games with their only loss coming at the hands of 6A No. 1 Hazel Green who only has one loss this entire season.

Montevallo jumped up one spot from last week’s No. 10 ranking to No. 9, just ahead of area foe Montgomery Academy. During their matchup on Jan. 24, Montevallo took down then No. 4 Montgomery Academy 52-48. The Lady Bulldogs are now 17-5 overall on the season and sit at 4-1 in area play. Still one of the best girls’ teams in the state with Niven’s coaching and the play of Lauryn Lilly.

Three other teams were nominated for a spot, two of which were in the 7A classification. Both Oak Mountain and Thompson have spent some time in the top 10 this year, but have struggled of late and continue to just miss out on a top 10 spot, but are still being nominated because of the talent they have.

The Warriors currently sit at 15-10 on the season. That record includes a 2-3 mark in an area that features No. 2 Hoover and No. 7 Tuscaloosa County. It’s probably the toughest area in girls basketball and Thompson is the odd team out right now, but will have a chance to impress in the area tournament.

Oak Mountain (13-7, 3-2) has also had an up and down season, but has established themselves as the second place team just behind Spain Park in Area 6. It is looking like they will carry the No. 2 seed into the tournament and have a good chance at advancing into the regional round of the playoffs.

Just down the road from Oak Mountain High School is Westminster at Oak Mountain, who was the last team nominated in this week’s rankings. The Lady Knights (14-4, 4-0) are looking like the favorites to win Class 1A area 8 and have a chance to make a deep run in the playoffs.

By BAKER ELLIS / Staff Writer NORTH SHELBY – Hunter Wright got into running the same way most boys get... read more