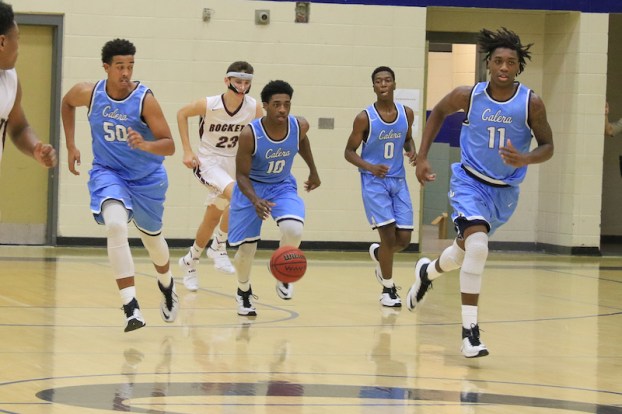 Calera jumped back into the 5A top 10 after a strong week that included scoring 80, 90 and 72 points in three consecutive wins. (For the Reporter/Dawn Harrison)

It’s crazy that we are down to our last week of the basketball regular season and only fitting that for the first time this season, six Shelby County boys teams made their respective top 10. The previous season high was five, but thanks to some great area play recently, several teams were able to make a push for a spot in the rankings.

The 6A classification still sits as the most represented by county teams as three made the top 10 this week. Last week’s rankings featured Pelham and Helena taking the top two spots, but saw Chelsea fall out of the rankings. This week Chelsea jumped back in to take over the No. 10 ranking, while Pelham held steady at No. 1. Helena dropped two spots down to No. 4, but is still solidly in the top 5.

The last week has been good to the Panthers (16-8, 4-0) as they took down No. 2 Helena and new No. 10 Chelsea to finish area play a perfect 4-0, which clinched the regular season area championship and gave them a bye in the upcoming area tournament. That bye will automatically advance them to the sub-regional round of the playoffs as well. Pelham has now won five consecutive games.

Helena (20-6, 1-2) has been one of the hottest teams over the past two months of basketball with their only losses over the past few weeks coming to Pelham by a combined eight points.

Chelsea (16-9, 0-3) has been a good team most of the season, but finds themselves on the wrong end of a tough area. They will meet Helena in the first round of the area tournament with the winner moving on to the tournament final as well as the sub regional, and the loser going home.

Elsewhere, Spain Park (10-12, 4-1) came in at No. 10 in 7A for the second consecutive week. They bolted into the top 10 again last week after upsetting No. 3 Huffman and No. 1 Mountain Brook in back-to-back games. Since the last rankings they have beaten Oak Mountain and fallen to Huffman as the Vikings got revenge.

After a week away from the rankings, Calera (16-7, 5-1) jumped back into the top 10 of 5A as they came in at No. 8. The Eagles did so by winning three in a row and scoring 80, 90 and 72 points in those three games. They sit just behind area foe Dallas County whom they split the regular season matchups with and are tied with at 5-1 in area play.

Moving on to the 3A ranks, Montevallo (16-4, 5-0) came in as the second highest ranked team in the county at No. 3. The Bulldogs have been consistently good all year behind stud Da’Shaunte Smith, who is a double-double machine, but have improved recently thanks to the fact that several others, including Tavarus Hall, have stepped up to give Montevallo a second scoring and rebounding threat in the game. They officially locked up their regular season area championship with a win over Montgomery Academy on Jan. 24.

Vincent moved to 17-9 (3-0) after two wins over Woodland and Fayetteville on Jan. 24 and 25, and is another team turning heads right now. A team that came in not as talented as last year’s is one win away from becoming area champions and hosting the area tournament. Being in a three-team area, that would automatically qualify them for the sub-regionals. The Jackets just missed out on a top 10 spot, but were nominated.