WILSONVILLE – After more than 50 years as a pilot, Wilsonville resident Elwyn Roosevelt received the Wright Brothers Master Pilot Award from the Federal Aviation Administration, which is the most prestigious award the FAA issues to pilots. 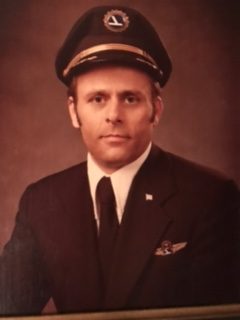 This award is named after the Wright Brothers, the first U.S. pilots, to recognize individuals who have exhibited professionalism, skill, and aviation expertise for at least 50 years while piloting aircraft as “Master Pilots.” The effective start date for the 50 years is the date of the nominee’s first solo flight or military equivalent.

In all of his years as a pilot, Roosevelt, who will celebrate his 78th birthday on Feb. 10, has never had an accident.

Kenneth Spivey, FAA Southern Region Manager, presented the Master Pilot Award and congratulated Roosevelt on his achievements and his steadfast adherence to the Code of Federal Aviation Regulations.

Roosevelt flew his first solo flight at 16 years old. He grew up living in airports because his father was a fixed base operator who also taught flying. He spent his youth learning aircraft mechanics from his father and later became a mechanic in the Air Force.

Roosevelt was a pilot with Eastern Air Lines as a captain for 25 years on the 727, 757 and A300 aircrafts. Now that he is retired, he continues to fly aircrafts, restores vintage aircrafts and builds experimental aircrafts from scratch.

Following the family tradition, his son David also builds experimental aircrafts and is a pilot for Atlas International Freight, flying the 747 aircraft, which is a massive aircraft with a wingspan of nearly 200 feet.

Roosevelt and his wife, Shirley, have lived at the Lazy Eight Airpark in Wilsonville for about 12 years in an apartment-like hangar they call their sky loft. Roosevelt said that living on an airstrip again like he did as a child is the fulfillment of a dream that makes it easier for him to continue his passion for aviation.

Following the presentation, an Italian dinner and dessert was catered by Cynthia Bertolone from Cake Art in Pelham.