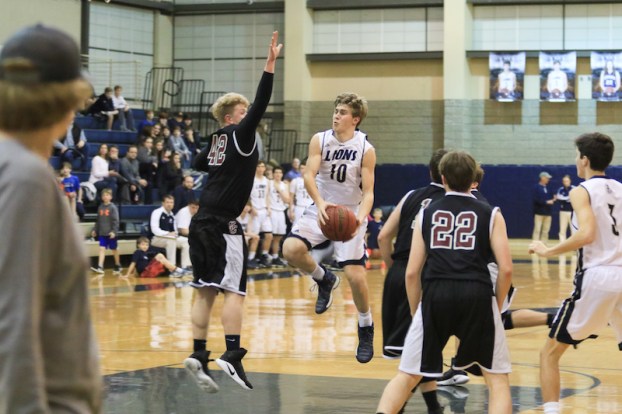 Briarwood's Michael Hiers avoids the contact as he lays the ball in for two of his team-high 17 points. (For the Reporter/Dawn Harrison)

NORTH SHELBY – It’s been an up and down year for both Briarwood and Shelby County on the hardwood. The Lions have a better overall record, but the Wildcats were keeping pace in area play.

The two met in each other in a very important Class 5A Area 8 matchup on Friday, Jan. 27, at Briarwood High School. It was a rematch of a game that Shelby County won 52-49 back on Friday, Jan. 13.

Clearly Lions’ head coach Bobby Kerley was not happy with his team’s defensive effort in the first quarter. They made the necessary adjustments in the second, however, and held Shelby County to eight less points in the quarter. Yet again, Briarwood used a balanced attack on their way to 14 points as they took a 31-26 lead into the half.

The Lions offense looked impressive all night, but really woke up in the second half posting 20 points in the third quarter after hitting three 3-pointers and all three of their free throws in the quarter. The defense continued to make things tough for the Wildcats and held them to 13 points as Briarwood took a 51-39 lead after three.

A big plus for the Lions was holding Bates to a combined two points between the second and third quarters after he killed Briarwood in the first as Shelby County’s only source of offense.

Briarwood used six different scorers in the final quarter to close things out as they put up 20 more points and held the Wildcats to just 11. After giving up 18 in the first quarter, the Lions buckled down defensively and didn’t give up just 11 field goals the rest of the way and no more than 13 points in a single quarter.

Briarwood only made 16 of their 27 free throws or they could’ve made the game look even more lopsided.

The Lions were led by Michael Hiers 16 points after he hit three 3-pointers in the game. Barrett Tindal added 15 after hitting 8 of his 11 free throws and three field goals. Carson Donnelly gave Briarwood a third double-digit scorer with 13 in the game after hitting six field goals in the game. In all, 1o players scored in a team effort for the Lions.

Bates led Shelby County with 17 points, only four of which came after the first quarter. Brandon Green and Mitch Nash both added 10 points to give the Wildcats three double-digit scorers in the game.

It’s looking like the two will meet in the first round of the area tournament, which means the winner will move on to the tournament final, as well as to the sub regionals of the playoffs.

Jags lose to Spartans, get 2 seed in area 6 tournament