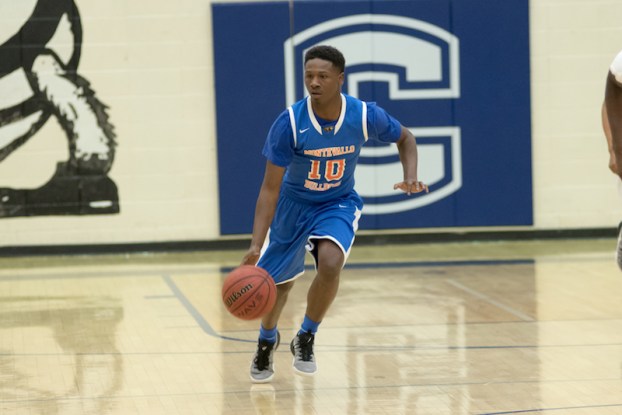 Tavarus Hall has stepped up and helped lead Montevallo over the past couple of weeks. He did it again in this one with 15 points. (File)

MONTEVALLO – Coming into their matchup on Thursday, Jan. 26, Montevallo and Calera had been two of the hottest teams in the state, creating for a fantastic rivalry game between two of the county’s best teams.

Montevallo, the No. 3 team in Class 3A, and Calera, the No. 8 team in 5A have both been on impressive winning streaks. The Bulldogs have done so behind multiple players gathering double-doubles in what seems to be every game over the past three weeks, while the Eagles have used some impressive offense scoring 80, 90 and 72 points in their last three contests.

Everything set this game up to be one of the best games in Shelby County this year and it didn’t disappoint as Montevallo narrowly won 71-68 thanks to a last second shot from Daqwan Bryant who ended the game with eight points.

“It was the best high school environment I’ve seen all year,” Montevallo head coach Gregory Dickinson said of the atmosphere both fans and teams created.

Da’Shaunte Smith, as he has done all year, started the game strong for the Bulldogs with back-to-back 3-pointers to give Montevallo a quick 6-0 lead, but Calera being the offensive team they are answered that very quickly with a 13-7 run over the past few minutes of the quarter to tie things up at 13 after one.

“Both defenses made it hard to score in that first quarter,” Dickinson said of the unusually low score by the two normally explosive offensive teams.

The two juggernauts didn’t stay quiet for long though as both caught fire on the offensive end of the court in the second quarter. The Eagles scored 21 points in the quarter, which was just one more than Montevallo’s 20 to take a narrow 34-33 lead into the break.

Despite being out-rebounded in the third quarter, which is rare for Montevallo as the normally have at least two double-figure rebounders, the Bulldogs were able to outscore Calera 19-17 and take a one-point lead as they headed to the fourth.

The intense rivalry had already lived up to its hype and set up a fourth and deciding quarter that either team could win.

It was close all the way down to the final whistle, but with 9 seconds left on the clock, Calera held a 68-67 lead. Bryant, however, was able to get an open look and knock down a shot with eight seconds left on the clock to give the Bulldogs a 69-68 lead. Calera had one last chance, but was unable to grab the lead back and Montevallo hit two free throws to seal the final score of 71-68.

“It was such a close game all the way until the end,” Dickinson said. “Smith really carried us with his near triple-double, and especially the four blocks on the defensive end.”

Smith ended the game one assist shy of a triple-double, but was able to attain another double-double with 26 points and 10 rebounds. Tavarus Hall, who has been a huge contributor lately, ended the night with 15 points and TreShawn Brown had six points and an impressive 15 rebounds. In his last two games Brown has 35 rebounds.

Calera was led by Tariq Wright with 12 points, while CJ Smith and Tyler Millin both chipped in 10 to give the Eagles three double-digit scorers.

The win moved Montevallo to 17-4 (5-0) on the year and has established them as one of the best team’s not only in the county, but the state. Calera shouldn’t hang their heads either. From what I have seen this year they can compete with most teams and with their 16-8 (5-1) record, the Eagles look like they will make a run in the playoffs.

By ALEC ETHEREDGE | Sports Editor Montevallo and Spain Park have seemed like automatics for a top 10 spot this... read more