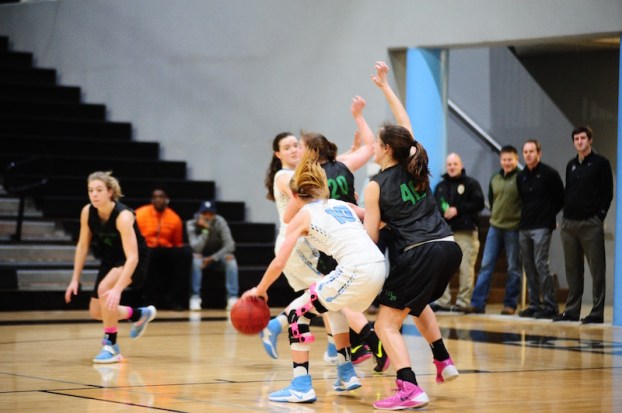 HOOVER – Spain Park’s girls basketball team had been the most dominant team in Class 7A Area 6 heading into their Friday night, Jan. 27 matchup with Mountain Brook having jumped out to 5-0 record in area play and winning those games by an average of 27.4 points in each game.

Taking on the Spartans in the last area game of the season they had a chance to finish the regular season with a perfect 6-0 area record. Behind strong performances from freshman Sarah Ashlee Barker and Claire Holt, the Jags were able to come out victorious with a 60-40 win.

Having already clinched the regular season area championship and the No. 1 seed in the upcoming area tournament, the game didn’t mean much for Spain Park (17-8, 6-0), but they didn’t act like it as they started the game strong on a 6-0 run. Sarah Ashlee Barker started especially hot gathering the Jags’ first four points in the game off of two fast break opportunities.

Barker went on to grab eight first-quarter points as Spain Park jumped out to a 16-6 lead after one, using several turnovers to spark an offensive outburst.

Moutain Brook didn’t go away quietly as they started the second quarter looking like a different team. The Spartans came out and went on a quick 5-0 run in the first 1:24 of the quarter to trim the Jags’ lead to six at 16-11.

The two teams traded runs with each other the rest of the quarter as Spain Park answered with a quick 5-0 run themselves, which was followed by another 4-0 run by Mountain Brook to get back within six at 21-15. The Jags ended the half on a 6-0 run after Barker hit a shot with six seconds left to give her 10 first-half points and take a 28-15 lead at the break.

The Jags came out of the locker room and continued the strong play as Claire Holt hit a 3-pointer to start things off, which extended Spain Park’s lead to 31-15. They started the quarter on a 5-0 run extending their run to 11-0 dating back to the end of the second.

The Jags eventually jumped up by 20, 41-21, before Mountain Brook answered with an 8-0 run to get back in the game and only trail by 11. After Holt, who had a strong quarter with nine points, hit another shot, Barker went on her third 4-0 run of the game to put Spain Park up 47-29 heading to the fourth quarter.

Not much changed in the fourth as Barker and Holt continued to lead the Jags. Holt grabbed six quick points in the quarter to put Spain Park up 53-31. The two teams played pretty much even the rest of the way as the Jags held around a 20 point lead the rest of the way and went on to win 60-40.

Barker, a freshman, led Spain Park with 21 points in the game. Holt added 16 in the game for the Jags as those two had tremendous games.

By ALEC ETHEREDGE | Sports Editor PELHAM – Shelby County has produced some of the best bowling teams in the... read more