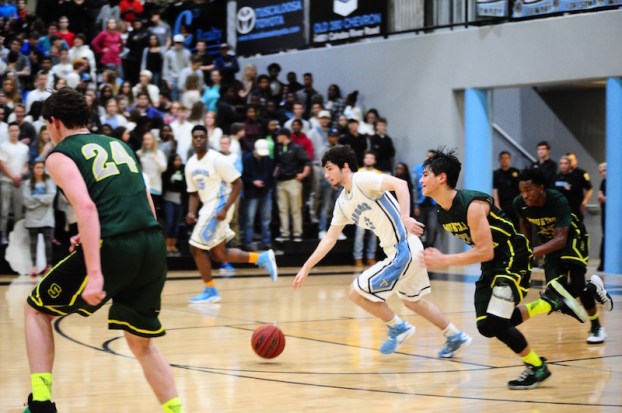 Spain Park struggled against Mountain Brook's full court press the entire night, which was a big reason for their 83-43 loss. (Reporter photo/Alec Etheredge)

Jags lose to Spartans, get 2 seed in area 6 tournament

HOOVER – On Jan. 17, Spain Park and Mountain Brook met for the first time this season. The Jags were coming off of an upset win over No. 3 Huffman and the Spartans were the top ranked 7A team in the state. It led to one of the more epic high school basketball games you will ever see as the Jags upset No. 1 Mountain Brook 66-62.

When they met for the second time this year on Friday, Jan. 27, you could say it was an even bigger contest with the regular season area championship on the line. Win you get the No. 1 seed and host the area tournament, lose you get the No. 2 seed and face a tough Huffman team in the first round.

The circumstances might have been as intense as the first game, but the actually game itself was not. Mountain Brook started the game on fire and played their best game all the way through to take down the Jags 83-43 and win Area 6.

Spain Park (10-13, 4-2) will now play No. 5 Huffman for the third time this year in the first round of the area tournament, which sets up a tough road for them to make the regional round of the playoffs.

From the very start, it was all Spartans as they hit a 3-pointer in the first 10 seconds of the game, a trend that continued throughout the first quarter.

Mountain Brook hit back-to-back-to-back 3-pointers to start the game on a 9-0 run within the first 1:44 of action. They had 15 points in the first 3:37 of the game and ended the quarter with eight threes and 31 points to Spain Park’s 13.

In the second quarter, it wasn’t necessarily the Spartan’s offense that kept them going. Although the offense was still making baskets, it was the defense that carried them in the quarter. They made life so difficult for Spain Park who used all of their energy just trying to get the ball across the half court line.

Mountain Brook had done enough to build up a 49-21 lead at the half. Sean Elmore hit four 3-pointers in the half as he accumulated 16 of his 18 points. Trendon Watford had 13 points in the second quarter alone for the Spartans as he and Elmore combined for 29 points in the half.

The Spartan’s starters set the entire fourth quarter as they game was in hand. Even without playing the final frame, Watford ended the game with 22 points, Elmore ended with 18, Johnson ended with 14 and Alex Washington ended with 11, giving the Spartans four double-digit scorers. They combined to hit 14 3-pointers in the game.

A key part of Mountain Brook’s success was holding Spain Park standout Jamal Johnson to just four points in the game. The Jags were led by 12 from Trey Johnson and 10 from Xavier Blanchard.

By ALEC ETHEREDGE | Sports Editor HOOVER – Spain Park’s girls basketball team had been the most dominant team in... read more