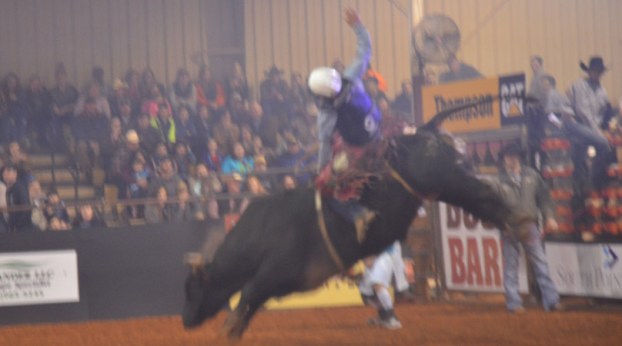 At Shelby County Extreme Bulls, competitors had to try to stay on the bull for at least eight seconds. (Reporter Photo/Amalia Kortright)

“We’ve got 33 of the top cowboys in the southeast who are competing for the title of the Shelby County Extreme Bulls champion,” said Rockin’ D Rodeo Productions owner Ryan Davis. “All 33 guys will get on one bull and then we’ll bring the top eight guys back, and they’ll get on an additional bull.”

Davis said bull riding is a unique sport, because it is completely unlike traditional contact sports and it involves animals.

“It’s family friendly, and it’s not anything like football or baseball,” Davis said. “It’s also a tough sport, because you’ve got cowboys competing against bulls. I think people enjoy it, naturally.”

Davis said bull riding can also be incredibly dangerous, and requires both physical and mental agility.

“The fear factor is there. You could actually die, get paralyzed or get stepped on very quickly and very easily,” Davis said. “Not only do you have to be physically strong and very good at what you do, you have to be mentally tough.”

The Cowboy Shop co-owner Shari Wilkins said she has been selling merchandise at the event for the past eight years, and is amazed to see how the event has grown.

“[Davis] has done a really good job with it,” said Wilkins. “He actually now has to bring bleachers in for the crowd. He puts on a really good show. They’ll have the lights flashing when he’s introducing the cowboys. He puts a lot of extra effort into it.”

Wilkins assured everyone that no bulls have been harmed during any of the events.

“There are a lot people who want to say how cruel it is, but look at those animals and how fat and healthy they are. They work for eight seconds once or twice a month. Who wouldn’t want to have a job where they worked eight seconds and got fed and got to hang out. They’re treated very well,” Wilkins said.

Harpersville resident Becky Henson said one of the reasons she goes to the event each year is for the people.

“Lots of our friends and family are here, so it’s just a good place to come for some good, country rodeo. My grandsons love coming here,” Henson said.

Members of the Vincent Revival Center helped by showing people where to park, cooking and running concession stands.

HARPERSVILLE – January is the time for kids at Stone Hollow Farmstead in Harpersville. School children will visit the farm... read more