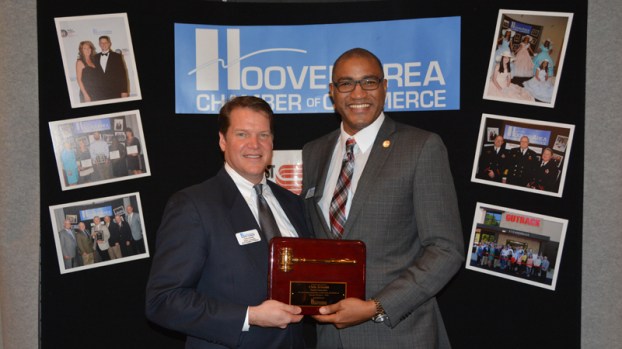 HOOVER – New officers and directors for the Hoover Area Chamber of Commerce were installed during a luncheon on Thursday, Jan. 19.

The luncheon was held at Hyatt Regency Birmingham – The Wynfrey Hotel and sponsored by First Commercial Bank.

John Mount, pastor at The Church at Ross Bridge, gave the invocation before the President’s Awards were announced.

Levine’s company has been a Chamber member for more than 25 years, and he has been active throughout that time. Levine has served on the Chamber Board of Directors a total of almost 10 years and attended almost 94 percent of the networking events the Chamber has had over the last 20 years.

Graffeo’s company has been a Chamber member since 2008, and Graffeo has been involved with the Chamber’s Golf Committee.

After the awards were presented, the Chamber’s new officers and board of directors were installed.

“They share a vision for the continued growth and success of the Hoover area business community,” Greene said about the new officers and board members.