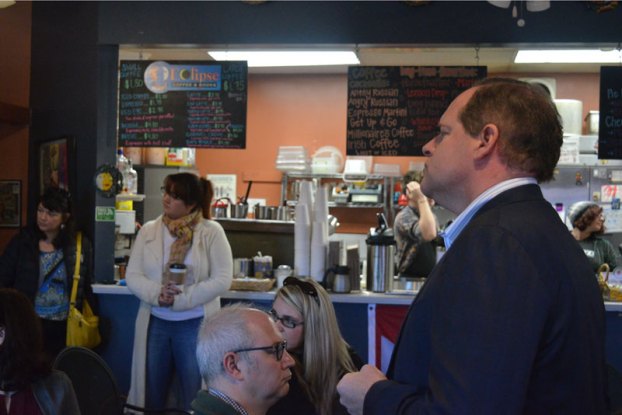 Senator Cam Ward hears from the people of Montevallo who attended the Coffee with Legislators event at Eclipse Coffee and Books on Jan. 24.(Photo by Steven Calhoun)

Montevallo citizens had coffee with legislators

Eclipse Coffee and Books in Montevallo hosted a “Coffee with Legislators” event on Jan. 24 at 8 a.m.

The event was organized by the Montevallo Chamber of Commerce as a way for the community to speak with their legislators about the upcoming legislative session.

Senator Cam Ward and Representatives April Weaver and Matt Fridy sat in the cozy atmosphere of Eclipse with about 40 citizens from Montevallo and the surrounding area. Many educators and students from the University of Montevallo were in attendance to express their concerns about a range of topics.

Ward said budgetary issues would be addressed in the next session and he would focus on investing in mental health issues. Weaver touched on Medicaid and plans to fix what she called a revolving door in the prison system. Fridy mentioned a Medicaid bill that would focus on fraud committed by insurance providers and noted that cutting the “regressive” grocery tax in Alabama was a priority for him.

Mayor Hollie Cost was in attendance as well, and spoke up after many had addressed the issue. She echoed the sentiment of multiple speakers before her who questioned Ward’s intent in posting a picture to social media that was taken by many in attendance as a polarizing statement against protestors in the women’s marches across the nation.

Cost and others wanted acknowledgement that the photo he shared was not from the women’s march in Washington. Ward conceded the photo was not from the march and that it was an image he found on the internet after a quick search. He claimed his intent was to “call out the extremes on both sides” in the heated political climate he saw.

One citizen asked Ward, “Do we have your dedication to promote bipartisan issues?”

Ward responded that he would do his best, and mentioned prison reforms as a bipartisan issue he would stand behind.

“We don’t consider who the ideas come from in legislature. It’s either a good idea or a bad idea and we shouldn’t put a party label on it,” Fridy said.

“We need to seek out the experts, and those are parents and teachers,” Fridy said. “We need to trust teachers from the bottom up, not from the top down.”

HARPERSVILLE – January is the time for kids at Stone Hollow Farmstead in Harpersville. School children will visit the farm... read more