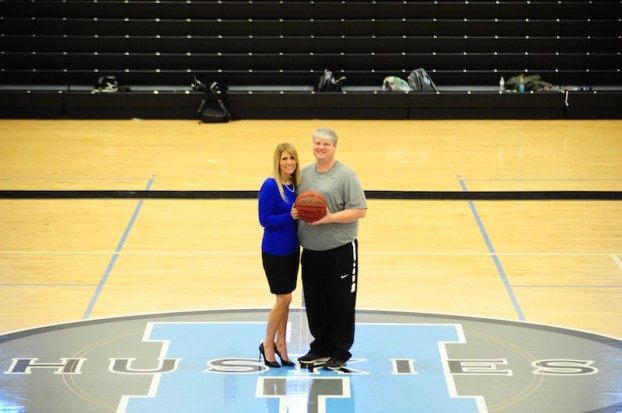 Leigh and Chris Laatsch stand together in the middle of the Huskies gym, a place that has created many memories for them over the past few years. (Reporter photo/Alec Etheredge)

Laatsching on: Family means more than blood relatives to this basketball couple

HELENA – Sept. 25, 1991, is where this story begins. That is the year Chris Laatsch and Leigh Laatsch decided to become husband and wife, which embarked them on a journey that neither knew was coming.

Twenty-five years and seven kids later, the Laatsches have given true definition to the term family, not just with their own kids, but the kids Helena head basketball coach Chris Laatsch now coaches and has previously coached. When we think of coaching stories, we think of shows like Friday Night Lights, and much like the television show, these two have a love for sports and making it a part of their family.

“I never thought I was going to be a coach’s wife,” Leigh Laatsch said. “I didn’t know this is what our life was going to be like, and I love it. People are automatically curious how we do things and we just look at everything as our family. We coach these boys like we coach our family because they are a part of our family.”

It’s not just about coaching, winning or losing to the Laatsches, it’s about teaching kids life lessons they can use in the future. Whether it be wearing the same shoes and socks, not complaining to the refs or accepting a role on the bench, everything they do has a lesson behind it to better the young men and women in their care.

Coach Laatsch brought up a recent memory that somewhat stung but made his point. In a tie game with Pelham and 0.1 seconds left on the clock a foul was called against the Huskies, which sent Justin Allison to the free throw line, who calmly knocked down both opportunities to win the game.

“They called a foul with minimal contact in a tie ball game that I didn’t agree with, but I never said that to my kids,” he said. “I told them that we needed to do a better job throughout the game so we didn’t put ourselves in that situation. I don’t want them always walking around feeling like a victim. 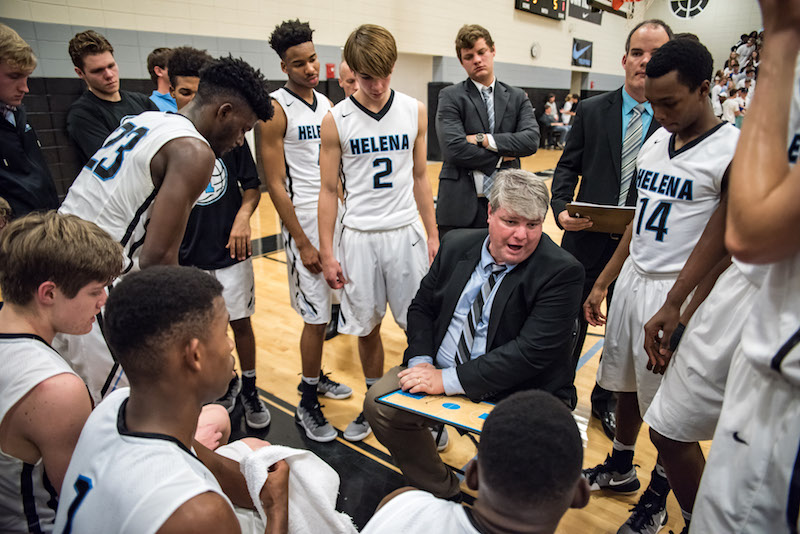 Laatsch draws up a play for his team during a timeout in the Pelham game back on Jan. 20. A game the head coach said had a teachable moment after losing 55-53 to the No. 1 team. (Reporter photo/Keith McCoy)

“I wanted to make the point that we can’t walk around blaming the official for a bad call, when we could have executed better during the game to prevent ourselves from being in that situation. That’s the way life is. I don’t want them walking around looking for excuses when something doesn’t go their way, I want them to respond in the right way.”

Leigh Laatsch referred to it as a teachable moment in the biggest game of Helena’s season.

“We do that with our own personal children,” she said. “We’ve had to watch our own kids sit on the bench, but we make sure they own their role. Whether it be our own kids or our extended family with these players, we make sure they realize that instead of sulking and quitting the team when things don’t go your way, you own the role that you have.

“If they don’t get a certain job some day or get their way in life, we don’t want them to sulk, we want them to keep their confidence and be who they are so they’ll continue to work hard and strive toward what they want.”

One thing is evident when it comes to Laatsch’s coaching style and that is the kids come before anything.

“I couldn’t tell you January, 23, 2004 if we played a game or not, but I can tell you about my 2004 team,” he said of his true passion toward coaching. “The kids are a lot more important than the individual game and I always want to remember that. I want to be a coach that puts those kids in that light of how I treat them and love them.”

Coach Laatsch said he uses basketball as that vehicle to train them to be great men, husbands and fathers someday.

Game days for the Laatsch family are as busy as you might imagine. They’ve gotten a little easier with some of the kids away at college, but nonetheless a lot happens in this family on a normal game day. 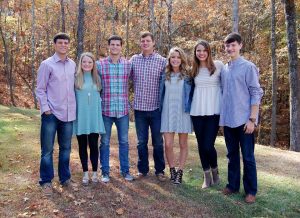 All seven kids in the ‘Laatsch patch’ pose for a picture. Each of them helps out with the program and the ones in college make sure to call and check in on the team. (Contributed)

“He doesn’t sleep very well the night before a game,” Leigh Laatsch said. “He is always tossing and turning as he runs everything through his mind.”

Coach Laatsch normally arrives to school at 6:15 a.m. on game days and will walk his team through a shootaround at 7 a.m. before school starts to get some shots up and go over the game plan for the night.

“It’s pretty much a sprint from about 1:30 on,” he said. “There’s a lot more to getting everything ready to host a game than people realize.”

A part of that preparation is coach Laatsch’s game notes, which aren’t your typical game notes.

“I always have a piece of paper and pen in my pocket,” he said. “Things pop into my head and I jot down notes about those random things that pop up like a counter to something that Chelsea or Pelham may run or something I need to talk to one of my players about.”

He always writes everything in detail on the left side of the paper and draws up plays and counters for his players to run on the right side.

“I find these notes all over the place,” Leigh Laatsch said. “His office is cluttered with them. Sometimes I’ll find one and write an I love you on the note so he’ll think about me.”

If you plan on getting your hands on these notes, good luck, because as coach Laatsch said, “they’re top secret,” and as Leigh Laatsch said, “you wouldn’t be able to understand his chicken scratch handwriting anyway.”

Game days for her are just as busy as his and from the way she describes it, just as nerve-racking.

“I have to make sure there is dinner,” Leaigh Laatsch said. “I normally try to get a crock pot of something going in the morning and get myself ready for the day. Depending on what kind of game it is I’m also trying to prepare myself and my nerves during the day even though I’m working.”

While watching her husband coach and her extended family of Husky players perform on the court, she considers herself to be a quiet but nervous spectator.

“Usually I get real nervous so I’ll stand a lot; I don’t do much sitting during a game, but I don’t yell because I just want the boys to do well and maintain their focus,” she said.

Normally by the time the game is over and the family has finished talking to everyone and playing their family pickup game, they will roll out of the gym around 11:30 p.m. to 12 a.m., which completes the long day.

Like Leigh Laatsch said, she didn’t expect to be a coach’s wife, but 21 years later she is still supporting coach Laatsch by showing up to the games.

“She has really made this a family thing. I get overwhelmed just thinking about how supportive and loyal she has been and my children have been. They hurt when we lose and they hurt when things don’t go well, and that’s just so selfless and I appreciate it more than I probably let them know,” coach Laatsch said holding back tears.

He went on to describe specific situations saying it would have been really easy for her to say “I have seven kids that are seven and under and I’m just too tired to go to the game tonight,” or “I’m pregnant and have three kids 3 and under so there’s no way I can go tonight,” but she never once did that.

“She has always been there to support me, which has trickled down to the kids,” coach Laatsch said. “We have five that aren’t in high school anymore, but they all call to check in on the team and visit to help out when they can.”

“I don’t want him to be stressed or having to worry about getting home to his family, so I just do my best to support him and make him realize that I am always there spending time with him,” Leigh Laatsch said. “None of this is a challenge. Having seven kids, a husband that’s a basketball coach and being a working mom are all challenges within themselves, but I view them all as opportunities to have a positive impact and make a difference.”

It is clear that this family cares a lot about molding a family of young men into great adults and neither one will leave the other’s side. They will continue to teach valuable life lessons to every young person they cross paths with, and there’s a good chance coach Laatsch already has his words of wisdom written down on his vertically folded page of notes.