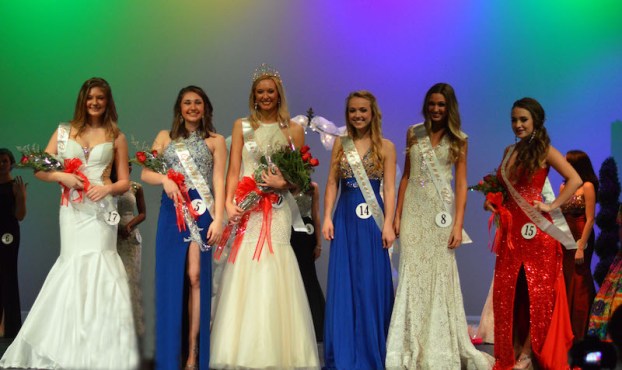 “Miss PHS was my very first pageant,” said Pelham High School senior Riley Taylor. “I wanted to do well, but I am still stunned that I won.”

As the newly crowned Miss PHS resumes her regular daily schedules of classes, rehearsal and her duties as Thespian President, she does speak of winning the pageant with an air of disbelief.

“I did feel comfortable and confident in the interview,” Taylor said. “Being able to speak well comes from years of training with Mrs. Stephenson in theatre classes.”

Last year, Taylor played the role of Cinderella in the spring musical. While she’s a veteran performer, she knew that she needed additional coaching to take the stage as a Miss PHS contestant. For the past two weeks, Taylor worked with a former Miss PHS, Natalie Womochil Robertson.

“Natalie taught me how to walk for the pageant and we studied for the onstage question,” said Taylor. “The question was only 10 percent of the total score, but I get stage fright even when I’m super prepared so I needed to feel ready for any possible question.

“I am excited about the $500 scholarship, but the best surprise of the competition was making new friends with people who had only been acquaintances to me,” said Taylor. “Everyone gets so caught up in their regular high school activities that it’s easy to only know the classmates that you’re with for your activities. Being in Miss PHS allowed me to really befriend students involved in many activities that I’m not involved in and to understand what drives their passions.”

Taylor is considering Lee University, UAB and a performing arts university in New York City. She has one audition completed and two others scheduled. Students majoring in the performing arts must audition to be accepted for their majors.

“The idea of starting over next year at any of these schools is nerve-wracking,” Taylor said.

She hopes to take the high school stage once more in this year’s PHS spring production, “High School Musical.”

All Miss PHS contestants enjoyed a memorable night on stage.