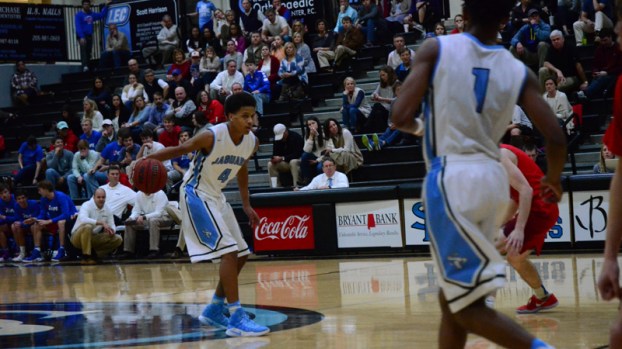 The team’s seniors were recognized before the game and then played important roles during the game.

Jamal Johnson scored a game-high 23 points, Polk posted nine in the third period as the Jaguars retook the lead the for good and finished with 15 points, which was matched by fellow senior Xavier Blanchard, who shook off an early injury.

Another senior, Trevor Williams, found Johnson for an alley-oop dunk on the first possession of the game.

When Johnson scored the first six points of the game, and converted a field goal while fouled and the ensuing free throw for a 12-3 SPHS lead with 3:55 remaining in the first period, it seemed as though the host Jaguars might roll.

But Vestavia cut into the lead, including a three-pointer from Mitchell Langley to make the score 16-12 after one period of play.

Mac Smith tied the game for Vestavia with two free throws early in the second period, but Blanchard dribbled for a mid-range jumper to retake the lead for the Jags.

Collard scored on a fast break, was fouled, and made the free throw to put the Rebels up 24-22.

Blanchard converted two free throws to make the score 27-26 in favor of Spain Park with about 40 seconds left in the half, but Tucker Queen made two freebies of his own to give VHHS a 28-27 lead at halftime.

Spain Park senior Ronald Fortson needed only one hand to put back a teammate’s missed shot on the first possession of the second half, but it seemed almost every time the Jaguars looked ready to make a run, Vestavia had an answer.

With 2:42 on the clock in the third period, Polk used a spin move to score despite contact from a Vestavia defender and then added the free throw to give him 15 points for the game and his team a 46-39 lead.

The Jaguars led by seven, 49-42, at the end of the third period and by as many as 11 points during the fourth.

Vestavia’s Gregg Morrison drained a three-pointer to make the score 59-53, as the Rebels would not go quietly and cut the lead to five before the final buzzer.

In addition to the top scorers already listed, Parker Boswell had eight points for the hosts.

No. 2 seed Spain Park will visit top-seeded Mountain Brook for the Class 7A, Area 6 tournament beginning on Feb. 9.