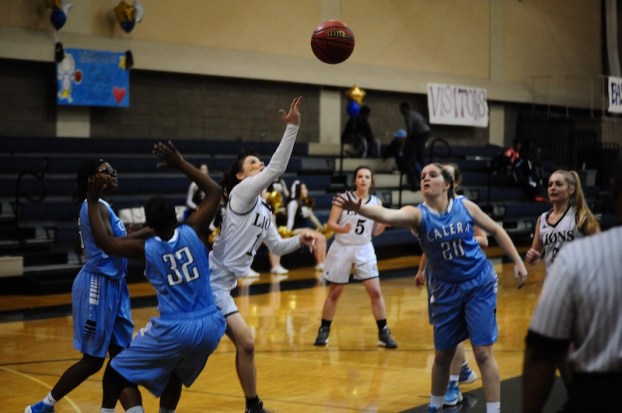 Morgan Hutchinson watches the ball roll off her fingers after getting around the Calera defenders for a layup. (Reporter photo/Alec Etheredge)

NORTH SHELBY – Calera’s girls basketball team had locked up Class 5A Area 6 after going a perfect 6-0 during area play making them the host of their area’s tournament. Outside of area play has been a struggle for the Eagles, however, and on Tuesday, Jan. 31, those struggles continued when they traveled to North Shelby County to take on the Briarwood Christian Lions.

If you were looking for offense this game wasn’t for you. Every quarter featured 10 points or less by each team and Briarwood held Calera to just three second half points on their way to winning 24-19.

From the tip you could tell it was going to be an offensive struggle, but the Lions looked to be on the wrong end of things early on. Calera did a great job defensively holding them to just three points in the first quarter. The Eagles didn’t light up the scoreboard either only putting up seven points, but in a game like this that seven points seems like 20.

There were a combined three field goals between the two teams in the first quarter, a trend that spilled over into the second quarter as well. Only five total field goals were made in the second, but the teams did combine for the strongest offensive quarter of the game putting up 14 points. The Eagles had edged Briarwood 9-5 in the quarter to extend their halftime lead to 16-8.

The teams pulled a Freaky Friday and completely switched places in the second half. While Briarwood struggled to score in the first half only putting up a combined 8 points, the Lions knew they were still in the game if they could turn up their defensive pressure.

They did just that and held Calera scoreless in the third quarter. While the Eagles were struggling, Briarwood took advantage, specifically Morgan Hutchinson as she scored back-to-back baskets to go on a quick 4-0 run to start the quarter.

The rest of the quarter saw Lauren Smith and Anna Donahue knock down a couple of 3-pointers to conclude a 10-0 run in the quarter by the Lions as they had all of a sudden jumped in front 18-16 after three.

Briarwood started the fourth in similar fashion, this time on a 3-0 run by Smith, who got two steals very quickly. One of those steals led to an easy layup, while the other gave her a free throw.

Calera was struggling to find any clean close looks so with 2:32 left to play in the game Charley Clark jacked up a close to NBA range 3-pointer that found the bottom of the net to pull the Eagles within two at 21-19.

That’s as close as the Eagles got, however, as Briarwood closed things out on a 3-0 run to seal the 24-19 victory after holding Calera to just three second-half points.

Not surprisingly there were no double-digit scorers in the game, but the effort both teams put up on the defensive end was something to watch.

Smith led the Lions with seven points, while Donohue and Hutchinson both added six. Senior Callie Tedder had two made free throws on senior night. Calera was led by eight points from Clark.

By GRAHAM BROOKS / Staff Writer HELENA–The final week of the regular season is here and Helena and Thompson are... read more