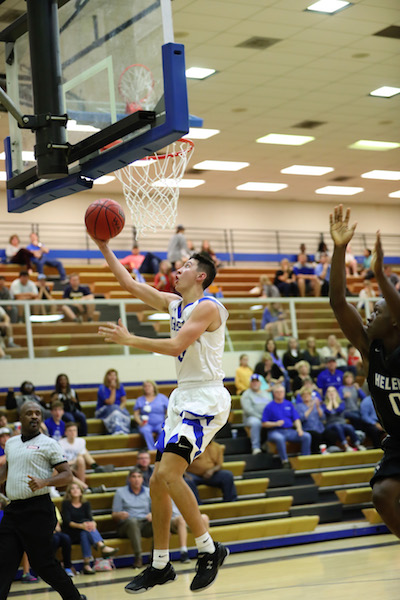 Chelsea senior leader Joseph Lanzi had a game-high 17 points to lead the Hornets to a win over rival Oak Mountain. (For the Reporter/Cari Dean)

CHELSEA – It’s always a treat to see two of the best go head to head in any sport. Chelsea head coach Nick Baumbaugh and Oak Mountain head coach Chris Love are just that, two of the best high school coaches not only in the county, but the state.

They faced off against each other on Tuesday, Jan. 31, in an out of class rivalry matchup. The game was a rematch of one that took place early in the season on Nov. 29, a game Oak Mountain won rather impressively 66-51.

In a complete reversal of the script, Chelsea completely dominated the second game of the series as they took down the Eagles 54-22. It was somewhat shocking, not simply because these teams are very even on paper, but because the Eagles had been looking much better as of late, but now sit on the losing end of seven straight games.

Class 6A No. 10 Chelsea (18-10, 0-4) has been up and down this entire season and sit on the wrong end of probably the toughest 6A area of basketball with No. 1 Pelham and No. 4 Helena, but in their last two games the Hornets have made a statement that they aren’t going to end the season quietly. During that stretch they have won by an average of 25.5 points after taking down Tuscaloosa County convincingly on Monday, Jan. 30, 53-34 as well.

The Hornets jumped all over the Eagles early in this contest, using a 16-4 first quarter to set the tone. That deficit was already going to be a struggle for Oak Mountain to overcome, but when Chelsea turned up the defensive pressure even more in the second quarter limiting the Eagles to just one point, it all but ended the game before it was halfway over.

Chelsea took a 31-5 lead into the second half, which was plenty of cushion for them to preserve the lead. The Hornets outscored Oak Mountain in every period of the game including a 10-7 third quarter and 13-10 fourth quarter to preserve the 54-22 lead.

By ALEC ETHEREDGE | Sports Editor HOMEWOOD – After trailing 39-34 at the end of three quarters, it looked like... read more