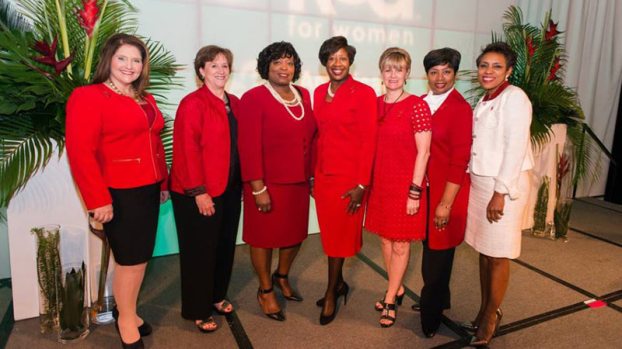 Casi Ferguson, far right, dons a white suit at a Go Red for Women luncheon to denote she is a survivor.

Heart health might not be at the forefront of a person’s mind unless he or she has already experienced issues directly related to the heart.

But, as survivors will tell you, heart problems can happen to anyone, regardless of age or gender.

Heart disease and congenital heart defects can cause major problems for men, women and children alike.

Leading up to CHD Awareness Week on Feb. 5-12 and the American Heart Association’s 30th Anniversary of the Birmingham Heart Ball Campaign, local survivors shared their stories and talked about why more people need to be aware of the risks and symptoms of heart health issues.

She and her husband, Chris, and their children, Payton, 5, and Grayson, 1, are settling into their new home in the Oak Mountain area after moving from Pelham over the holidays.

Last year, Tiffany was diagnosed with a congenital heart defect after experiencing debilitating symptoms nearly seven months after giving birth to her second child in a Caesarian section in November 2015.

“My whole diaphragm was pushed up into my chest,” she said. “I was having trouble breathing after they got him out.”

Tiffany’s doctors administered morphine to help her relax, and things seemed to return to normal.

In March, she started getting sick, first with pneumonia and then with a stomach virus.

“I kept going back to the doctor, thinking, ‘I can’t kick this pneumonia. I can’t breathe.’”

Then, on Mother’s Day weekend, Tiffany said she became dizzy every time she stood up. Her legs were so weak she fell repeatedly, which concerned her.

“I even fell with my infant one time,” she said.

She scheduled an appointment with her primary doctor and was told she could be experiencing post-partum effects since she had recently given birth.

Tiffany noticed other odd signs, though. As someone who was young and who exercised regularly, even when she was pregnant, she was puzzled when she started to tire more easily.

“I noticed I couldn’t keep up,” she said. “I would get beat red, too, and my heart was racing. I was having a lot of acid reflux, too. I was losing a lot of weight as well.”

Her symptoms continued to worsen. But, with nothing serious showing up on doctors’ tests, she was at a loss for what to do.

“I have never had so much pain in my life,” she said. “It was scaring me.”

Then, while at her parents’ house one night, she collapsed. She couldn’t drive home, so she spent the night there.

The next morning, Tiffany woke up feeling so weak that she couldn’t get out of bed.

Later, she collapsed again, feeling even worse than she did the first time.

She was taken to the hospital, where she underwent various tests, but nothing for her heart.

She decided to see a cardiologist, and found out she had a heart murmur and her aortic valve was leaking due to a hole in her heart, a congenital heart defect she never knew she had.

“My parents didn’t even know,” she said. “Nobody knew. It just became this huge nightmare.”

Tiffany is on anxiety medication, no longer drinks caffeine and has added more salt to her diet. Doctors will continue to monitor her heart for any changes.

“I want to be the healthiest I can be because I have my kids to live for,” she said. “More women need to listen to their bodies. It’s hard to make doctors listen to you nowadays, especially when you’re 29 and have never had a problem in your life.”

Tiffany is involved with the Go Red Movement to help educate women about heart disease and to raise awareness of CHD.

“Be persistent and know your body,” she said. “If you know something’s not right, see a doctor.”

Casi Ferguson of Hoover was an avid walker who could tackle 15 or more city blocks in downtown Birmingham with ease.

“I would walk at least two or three times a week,” Ferguson said, adding she was far from a “couch potato.”

She also was no stranger to walking on a track or finding other places to get in her daily steps.

Not too long ago, however, Ferguson started having trouble with her walks.

“It just became increasingly difficult for me to make that straight walk I had made for so long,” she said. “It got to the point where I couldn’t walk from Sixth Avenue to Fifth Avenue. It was such a struggle, and so weird for me. At one point, I could do that walk in heels.”

She thought maybe the temperature outside had something to do with her energy, but it still struck her as strange she so suddenly couldn’t physically do what she had done for years with no problem.

She went to the doctor and underwent her first stress test.

The Fourth of July was coming up, and Ferguson had plans to go out-of-town for the holiday.

But her plans changed when she started to feel ill.

After the holiday, Ferguson received calls to come back to the hospital for more tests.

“They decided to do an arteriogram, and immediately, they had to stop it to get me into heart surgery,” she said. “I had an enormous amount of blockage. The next 24 hours was critical to get me into surgery.”

In 2014, she underwent open heart surgery and a quadruple bypass. She takes medication and goes to therapy now.

“It just all changed that quickly,” Ferguson said of her life. “To have that happen was incredibly scary. It is so silent.”

Advice Ferguson had for others going through similar circumstances is to be patient.

“It’s scary, but just take it slow,” she said. “My new tagline is ‘Turn right and go straight.’”

Ferguson said her family, including her daughter LeNà, has been supportive since her diagnosis.

“They’ve been trying to hang in there with me,” she said. “I think we, as women, we just don’t like to say something might be wrong. Find something that makes you turn right and go straight.”

The ball is an annual fundraising event that has raised more than $16 million for local research, advocacy and community education efforts to fight cardiovascular diseases and stroke, according to a press release.

The 2017 Birmingham Heart Ball honorees are Dr. and Mrs. Derrill and Cameron Crowe.

Back to the start