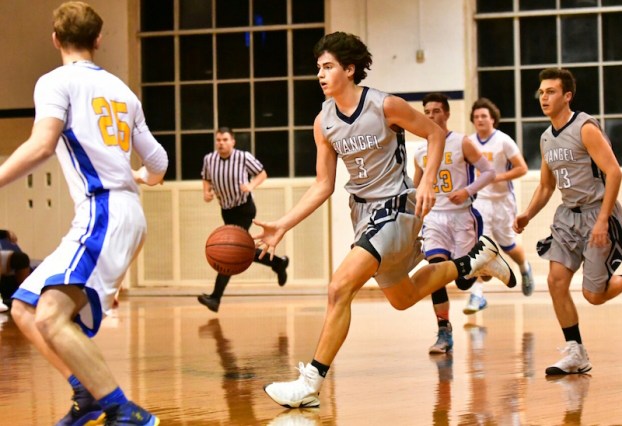 Jake Byers, above, led Evangel to a 65-52 rivalry win over Hope after dropping a game-high 26 points. (For the Reporter/Ted Melton)

HOMEWOOD – Evangel and Hope Christian Schools are separated by less than seven miles. Evangel calls Alabaster home, while Hope sits just down the road in Pelham. This creates a fun bragging rights game for the two ACSC schools every year in all sports.

They met on the hardwood in the basketball version of the rivalry on Tuesday night, Jan. 31, at Samford University in Homewood. What looked to be a one-sided game at the half turned out to be a heck of a game that came down to the final quarter of play as the Lightning got the second-half comeback win over the Eagles 65-52.

This game put a literal meaning to the definition of a tale of two halves. Hope looked strong in the first quarter putting up 17 points behind nine from Samuel Strayer, who hit four field goals and a free throw in the quarter. Evangel managed to hang close, however, as they put up 15 points themselves in a more balanced effort.

The second quarter was where it looked like the Eagles had seized control of the game as they locked up their pressure on the defensive end of the court. Hope held the Lightning to just two made field goals in the quarter and six points, while they put up five field goals and 12 points to take a 29-21 lead at the half.

Coming out of the break, it was evident that Evangel had woken up on both ends of the court. Jake Byers was responsible for nine of the Lightning’s 18 points in the quarter, which to that point was their best offensive quarter of the game. They also looked better defensively as they held Hope to just three field goals and eight points in the quarter.

All of a sudden, Evangel had erased their eight-point halftime deficit and taken a 39-37 lead just like that.

In the fourth, the Lightning exploded for 26 points out of nowhere thanks to nine more from Byers, bringing his second half total to 18 and giving him a game-high 26 points. Evangel also got help from Trent Russell, who had all six of his points in the game during the final quarter.

The Lightning’s defense wasn’t as impressive as the third quarter, but held Hope to 15 points, which was good enough after their offense had put up 44 points in the half on their way to the 65-52 win.

Byers not only had a game-high 26 points, but shot 8-14 from the field and 10-15 from the free throw line. He also added three rebounds, two assists and four steals. Jordan Bailey added 11 points for Evangel after shooting 3-4 from beyond the arc, and also grabbed a team-high seven rebounds.

Strayer led the Eagles with 15 points. Kenny Welch added 14 points and Garrett Cupp had 13 to give Hope three double-digit scorers in the contest.

By ALEC ETHEREDGE | Sports Editor NORTH SHELBY – With area play now concluded and the end of the regular... read more