Jefferson State Community College is offering a continuing education course with a new hook, literally, for anyone interested in crappie fishing, beginner to avid. 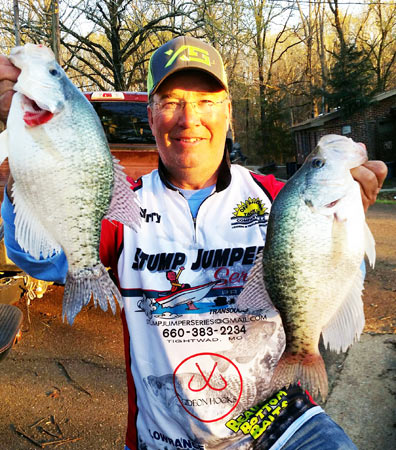 Barry Morrow, also known as the “crappie coach” for Jefferson State Crappie University, holds a couple of his catches.

The enrollment fee covers all course materials, including samples of crappie lures and jigheads. 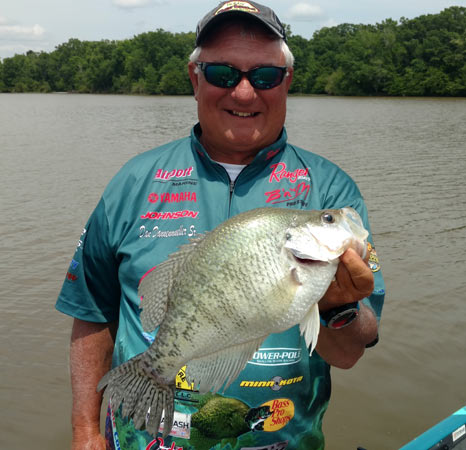 “Crappie fishing is no longer just a cane pole and bobber sport, and the pursuit of this sport fish has never been more popular,” Crappie University’s founder Gary White said. “Across the country, the crappie is gaining on bass as the No. 1 sport fish.

“Crappie University is not a seminar, it’s an accelerated course in the strategies and techniques for becoming a better crappie angler. Our instructors are the best-of-the-best on their respective topics.”

With the advent of several crappie fishing tournament trails, new and unique ways to catch the species under a variety of conditions are constantly being found and refined. Each Crappie University instructor has a technique he relies on most when the fishing gets tough. From spider rigging and long lining, to dock shooting, pushing crankbaits and other specialty techniques, the course instructors will share their knowledge on how they find and catch crappie. A question-and-answer session is included each night.

“It has been said that 90 percent of the fish are in 10 percent of the water,” White said. “While that may not be true in every instance, these instructors know exactly where to find the crappie in every season of the year. They are crappie pros and guides who have developed their techniques through trial and error.”

A retired school superintendent and wrestling coach, Morrow is now a full-time crappie guide in Oklahoma and Missouri.

He has been featured on the Sportsman’s Channel and fishes several crappie trails that travel the country.

He has won three Crappie Masters events and is the back-to-back winner of the Missouri State Championship. He is known nationwide for helping coach anglers in the art of crappie “catching.”

Another instructor is Alabama resident and crappie tournament pro Dan Dannenmueller, who is also publisher of the popular online crappie magazine, “Crappie Now.”

Also instructing are Lee Pitts and Sam Heaton. Pitts is a full-time guide who specializes in trips on Alabama’s famous crappie spot, Lake Weiss, but he also guides on Neely Henry and Guntersville. Pitts has been featured on the Southern Legends TV show, the Sportsman Channel, In-Fisherman magazine and numerous other publications.

Heaton is often called the “dean of southern crappie anglers.” He has a long-time reputation as a crappie guide in the Southeast, and is the former pro team manager for well-known fishing brands Spiderwire, Johnson Outdoors and B’n’M Poles.