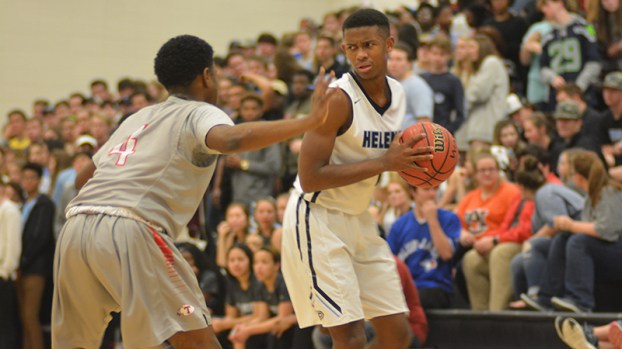 HELENA–The final week of the regular season is here and Helena and Thompson are gearing up for the upcoming area tournaments, but on Jan. 31, the Huskies and Warriors met in Helena where the Huskies took care of business on their home floor winning 47-34.

Helena was in control the entire game and never found themselves in jeopardy of losing a lead. Each time the Warriors would make a few baskets the Huskies had an answer.

Helena held an 11-7 lead at the end of the first quarter and proceeded to stretch their lead to 10 at halftime in large part to Jon Brown’s six points in the quarter. Helena held a 23-13 lead at halftime and Brown would eventually finish as the game’s leading scorer with 19 points.

A big part of the Huskies success came on the defensive end as Helena forced Thompson into some difficult shots and Huskies head coach Chris Laatsch thought his guys communicated well.

“We switched defenses a lot tonight and I thought our kids stayed on the same page,” Laatsch said. “When you switch defenses a lot, the fear is having maybe three guys thinking there in one defense and two in another but our guys were all on the same page and did a good job at being collected. I thought we made it tough for them to score.”

Thompson fought back in the third quarter when Littleton started to get hot from the 3-point line.

Littleton hit back-to-back 3-pointers at one point in the third quarter and finished as the Warriors leading scorer with 12 points. Thompson trailed 34-27 heading into the final quarter.

In the fourth quarter, Helena had some solid offensive possessions and chewed up a lot of clock and outscored Thompson 13-7 to hold on for an easy 47-34 win.

“We knew it was going to be a possession to possession grind and I thought our kids did that,” Laatsch said on closing out the game. “When we had to have a bucket we did and when they answered we were able to answer back again. We took quality shots and got the shots that we wanted and they were tough enough to get those. I was proud of our toughness to finish the game out and I thought we defended well and made it hard for them to get some shots.”

Justin Stuckey also added 10 points for the Huskies in the win.

By ALEC ETHEREDGE | Sports Editor PELHAM – Shelby County has produced some of the best bowling teams in the... read more