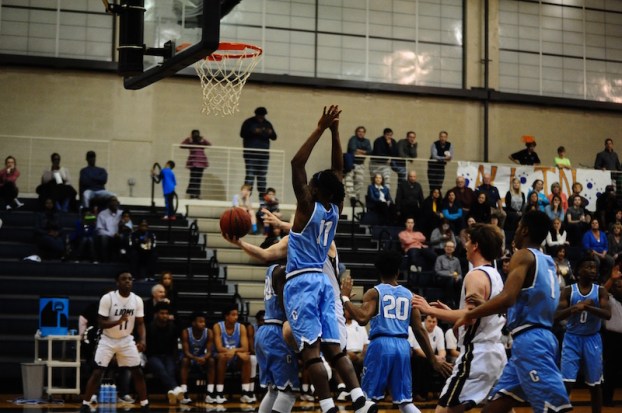 Yatil Gant of Calera goes up to try and block the Briarwood shot after one of several fast break opportunities for the Lions. (Reporter photo/Alec Etheredge)

After exploding for 26 points in the fourth quarter and having one of their best offensive performances of the season, Briarwood got the difficult week off to a great start by upsetting Class 5A No. 8 Calera 67-51 on senior night.

“It’s hard not to get emotional on a night like tonight,” Briarwood head coach Bobby Kerley said of the win on senior night. “I teach junior high, so I’ve been with these kids since the seventh grade and to watch them grow up to be a bunch of Lion-hearted guys is so fun.”

Briarwood ended up taking a one-point lead before any time had run off the clock thanks to a technical foul on Calera before the game started. This also meant the Lions started with the ball first, which they capitalized on hitting a basket to go up 3-0. After a 3-pointer on their next possession they had built up a quick 6-0 lead after showing a lot of hustle early on.

Calera answered by putting together runs of 7-4 and 6-0 to get within one point after the first quarter as they only trailed 14-13 despite two technical fouls by the Eagles giving Briarwood a combined five points.

Briarwood ran the fast break extremely well throughout the game, which is Calera’s biggest weakness on defense. Early in the second, they continued to take advantage by grabbing rebounds and running the break. Thanks to back-to-back plays where senior Barrett Tindall hit an and-1 and a 3-pointer for six of his 10 points in the quarter, the Lions had started the second on an 8-0 run.

“They do such a phenomenal job on the offensive glass,” Kerley said about Calera’s rebounding skills. “Our fast break starts with our ability to get a dog gone rebound and once we can and get the ball into (Donnelly’s) hands everybody better be on high alert and that was huge tonight.”

The Lions went on several runs during the game, but Calera just didn’t go away as they had an answer for every run in the first half. The Eagles put together an 8-2 run to climb right back in the game. They had done enough to get within three at 28-25, but Briarwood ended on a 4-0 run to take a 32-26 lead at the half.

Just like they had done all night, Calera answered the run with one of their own, outscoring Briarwood 7-0 over the last few minutes of the quarter to get within two at 41-39 heading to the fourth.

The Lions started the final frame on a 20-8 run to jump up 61-47. For the first time in the game, the Eagles had run out of energy and didn’t have an answer for the Briarwood run as they went on to win 67-51.

Briarwood’s seniors enjoyed a nice night as Tindall had 14 points, Luke Miskelley had six – all in the fourth quarter, Steven Giddens had four and Tripp Burns had two. Losing those four will be tough, but a couple of bright juniors will remain.

“To see these guys play as selfless and together as they play starts with those four seniors,” Kerley said of those four players in their last home game.

Juniors Carson Donnelly, Michael Hiers and Brayden Blythe all had big games. Blythe led the Lions with 15, while Hiers and Donnelly both had 12 in the game.

Calera was led by Yatil Gant with 13. Tyler Mills and CJ Smith also added 12 apiece for the Eagles.

“Before I scheduled the games, I wanted to play somebody that was really well coached and talented and all three of the teams we play this week fit that bill,” Kerley said. “We want to see our team accept the challenge so we are ready for the post season next Tuesday.”