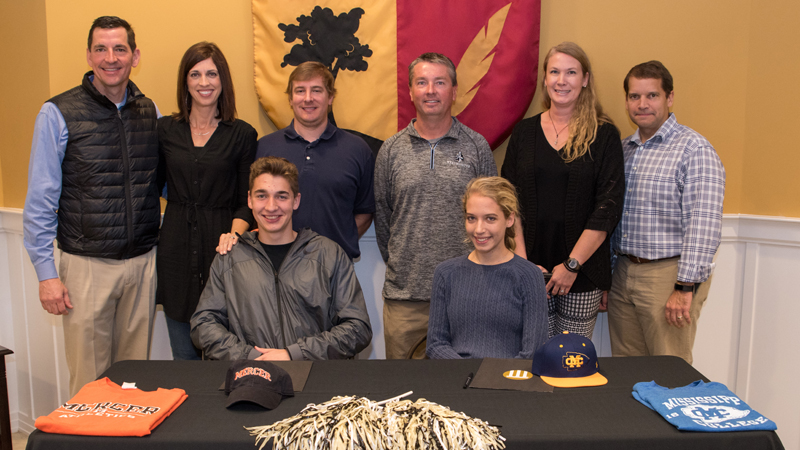 NORTH SHELBY – Camryn Neal and Jack Wilson were the center of attention on Wednesday, Feb. 1, as peers, family and friends filled the atrium at Westminster School at Oak Mountain to watch the seniors sign to play college soccer.

But Westminster coach Patrick Fitzgerald knows that it was Neal’s and Wilson’s hard work beforehand that put them in position to be able to continue their careers at the next level.

“You can’t just show up and sign a scholarship,” Fitzgerald said. “They have worked very hard for this.”

After a prayer, Fitzgerald acknowledged the parents and grandparents in attendance.

“Thank you for raising such great young adults,” he said. “Your kids are establishing paths and setting standards that others are following.”

Neal said she visited Mississippi College in Clinton, Mississippi for an “ID” camp and was contacted afterward and offered a spot on the team.

Neal said she was impressed by the friendliness of the coaching staff and players when she visited for the camp.

“It was a beautiful campus,” she said. “It all kind of fell into place.”

Fitzgerald noted that even during a season Neal had to sit out because of a transfer, she remained dedicated to team activities.

Wilson, meanwhile, was nicknamed “Rookie” because of his persistence in asking questions and working hard.

“Jack is the type of person that when you tell him to do something 10 times, he does it 20,” Fitzgerald said.

Wilson said Mercer University representatives visited to watch him play and then invited him to Macon, Ga. for an official visit on Dec. 9-10, 2016.

Wilson said he was impressed by the school’s business program.

“It offers a lot academically and athletically,” Wilson said.

Though this was a day for Neal and Wilson to look to their futures, they both still have a season of varsity soccer remaining in the spring.

“I’m really looking forward to this season,” Neal said. “We’re going to have a great team.”