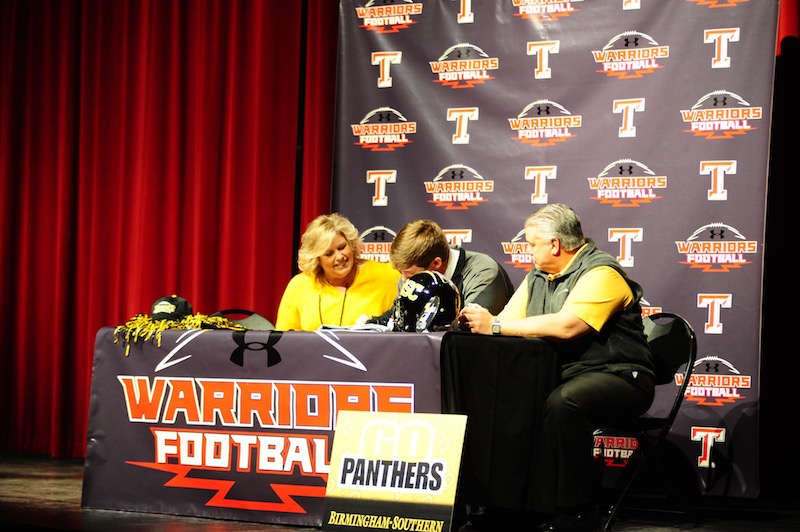 Tyler Couch signs with Birmingham Southern College during a ceremony in front of that featured an auditorium full of his family and fellow students at Thompson. (Reporter photo/Alec Etheredge)

ALABASTER – Thompson offensive lineman Tyler Couch made it official during signing day on Wednesday, Feb. 1, that he would staying close to home by attending Birmingham Southern College.

“This means a lot to me because since I was younger I have always wanted to play football in college,” Couch said just before his signing ceremony. “Getting to this goal in my life is big for me and my family, as well as my community and friends. All of my friends pushed me every year to go out there and give it my all.”

Couch, a 6-foot-1, 280-pound guard on the offensive line, will join the Panthers in the fall of 2017 as he continues not only his football career, but an impressive academic career. Couch will be a student athlete balancing a lot on the academic side as he has decided to become a pre-med student.

“Pre-med might be the more difficult of my challenges when I get there,” Couch said with a laugh. “The coaches and players have said that anytime I need help with school there will be somebody there to help, whether it be them or a tutor.”

Birmingham Southern is looked at as one of the top academic schools in the state and will definitely be a challenge, but sets up a bright future for him, which Thompson head coach Mark Freeman.

“Not everybody can be a Birmingham Southern guy,” Freeman said. “I kid around with the kids all the time, but sometimes that adds another zero on the paycheck. When you leave there, you know this, that guy has a great education and great morals.”

Couch is extremely excited for the challenge that lies ahead after deciding to go to the school he had wanted to go to during the entire process.

“The people there is what made this my top choice,” Couch said. “I went to a prospect camp there in the summer and ever since then the coaches contacted me every week to see how I was doing and they genuinely seemed to care.”

Couch had other offers from Millsaps, Maryville, Kenyon College and Sterling College.

“When I woke up this morning it really got to me. I realized this morning that ‘Hey, you’re fixing going through the next four years of your life living your dream.”

Couch will join the team a team that struggled going 1-9 in 2016, but he will be a solid guy in the line in years to come.