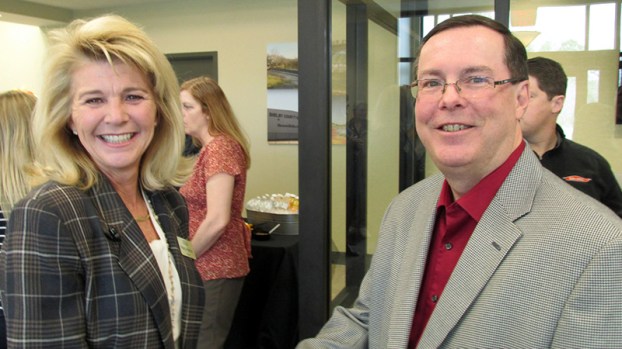 Alabaster leaders and members of the Greater Shelby County Chamber of Commerce hold a ribbon-cutting ceremony for the new eCO credit union in Alabaster on Feb. 2. (Contributed/Michael Brooks)

ALABASTER – Alabaster city officials and community residents gathered at the new eCO Credit Union site on Alabama 119 on Feb. 2 for the grand opening celebration. The new facility is on the site formerly occupied by the parsonage of Siluria Baptist Church.

“We had a ‘soft opening’ on Monday just to be sure everything was working, but today is our official opening,” said Chief Operations Officer Kenny Minton.

Minton explained that eCO was founded as a credit union for Jefferson County teachers in 1938, but now operates in Jefferson, Shelby, Blount, Cullman and Walker counties.

“We offer full-service banking,” Minton said. “But we’re a credit union which means we’re a non-profit owned by our members. We have what’s known as a ‘community charter’ from the state of Alabama, so we’re now servicing anybody who lives, works, goes to school or worships in Shelby County!”

The new facility in Alabaster replaces an older facility on Highway 31, and offers greater visibility and opportunity, Minton said.

“We’re happy to keep growing,” he said. “From its humble beginning, eCO now has $130 million in assets.”

Alabaster Mayor Marty Handlon added her congratulations at the event, first thanking the congregation of Siluria Baptist Church for their “splendid cooperation” with the city.

“This is the largest ribbon-cutting we’ve had in quite a while,” she said. “We’re working on the overlay on Highway 119. This will be a positive gateway to the residential areas of our city, and this facility is part of that gateway. We wish you most success.”

eCO Marketing Director Melissa Stewart said that as part of their opening week, eCO sponsored a “best teacher” contest in the county. She announced that Olivia Roberts of Vincent Elementary would receive the $500 prize.

Cristian Diaz-Vasquez, 21, of Chelsea was arrested in Talladega County on Saturday, Jan. 28 and charged with contributing to the... read more