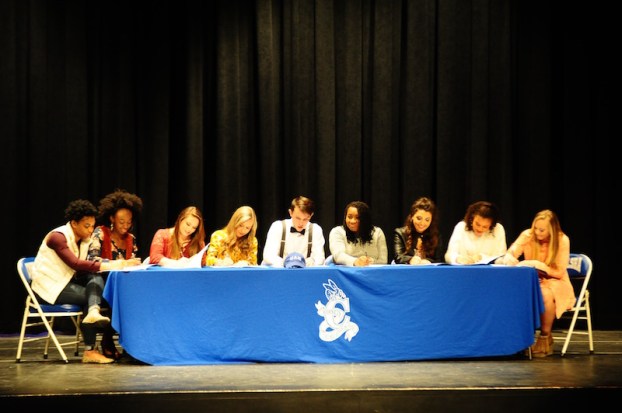 CHELSEA – Chelsea High School held its signing day on Thursday, Feb. 2, a day after National Signing Day. An impressive nine players signed on the dotted line during the ceremony in the school’s auditorium that featured family, friends and classmates all them to recognize the achievement.

“It was great to see how the students reacted to this,” Chelsea principal Wayne Trucks said. “It wasn’t just their team here with them, but the entire school got to celebrate and recognize these athlete’s achievements. It was more than a chance for them to get out of class, they really cheered and embraced seeing their classmates up on that stage.”

Trucks also took part in the fun of the day by posting a selfie with the signees on Twitter.

The volleyball class featured an impressive four of its six seniors signing during the ceremony after they had one of the best seasons in program history.

“I got here when these girls were ninth graders,” volleyball coach Jessica Pickett said. “Over the last four years they have set goals for themselves and exceeded expections.”

Chelsea’s girls soccer team also had strong representation at the signing ceremony with three of its seniors signing to play at the collegiate level.

Guillen: The University of North Alabama

“These young ladies have worked hard over the course of their career,” girls soccer coach Jonathan Hammett said. “Sabrina and Madeline have been in the program since their freshman year and Kh’Lari has been a part of since her eighth grade year. Watching them grow and develop over their careers is so gratifying for me.”

Alexander was the long boys soccer player to sign a letter of intent as he is headed to the University of Alabama at Huntsville to play college soccer.

“He did all of the things that are necessary to take yourself from one level to a much higher level and for that I am so proud of him,” Chelsea head soccer coach Wilee Miller said.

Shoop will be a senior on Chelsea’s softball team this upcoming season and will look to help the Hornets repeat as 6A state champions. After she finishes up her softball career this season she will be headed to Southern Union Community College to continue her softball days at the next level.

“She is the type of player you want in your program,” Chelsea softball coach Heather Mitchell said. “She is a hard worker and dedicated and has put in the hours to get to this point in her life.”

ALABASTER- The 2017 Warrior Volleyball Spring Clinic Series is set to take place during the months of February and March... read more